Zrin the Sun Fist is a Plasma Sentinel from Cryos. Thanks to his great size, musculature and strength, can use powerful melee attacks to decimate enemies.

Zrin was the first Living Weapon ever to be revealed. He was first seen in a screenshot that was leaked a few days before Darkspore's official announcement, where he was seen as concept art on Darkspore.com and in the Announcement trailer.

Criminal. Scoundrel. Gangster. Outcast. By the time the Corruptor’s hordes conquered Cryos, the jailers of prisoner Zrin were either corpses or mutated creatures who’d left their prisoners to die in their cages.

While he lay dying in his cell from silicon poisoning, Zrin received a visitation he did not understand and never would. A towering creature unlike any he’d ever seen appeared inside his cell and touched his head. Zrin writhed in agony, feeling his body surge with unbearable heat, as if from the skin of a star. And then the super-being--Crogenitor Ptyron--vanished as if he’d never appeared.

But when Zrin awoke, he stood, energized. And as if by instinct, he released plasma from one fist and lightning from the other to blast apart his jail cell.

Slaughtering a raging mass of Darkspore, Zrin escaped his gulag and ran for the nearest city he could find. Zrin’s aims were simple: pure survival. Had the Corruptor’s forces offered those to him without stealing his mind, he would have joined them in a heart-beat.

The power to melt or incinerate anything or anyone

Damage from direct attacks spawns Pain Hounds that can finish off Zrin's enemies.

A cyclone of fire and lightning - the ultimate protection against attackers

When activated, Zrin is surrounded by a devastating electroplasma aura that damages all enemies around him.

Calls down a meteor on a targeted point

Zrin is able to select any point on the map as a target, and then call down a flaming plasma meteor that explodes on impact, stunning and greatly damaging all enemies in the area of effect. 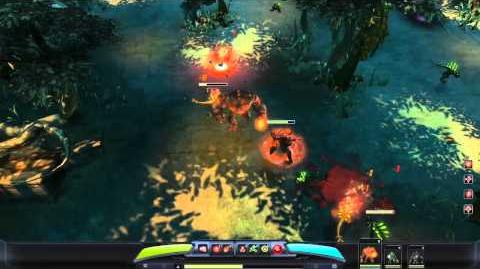