The Willosaur (also known as Tripod, Willosaurus, or just Main Character) was a tripedal, carnivorous creature showcased by Will Wright at the Game Developers' Conference in 2005. Originally nameless, fans quickly began to refer to the creature thus, combining '"Will" with "-saur" (a suffix meaning "lizard", often used in names of dinosaurs) referring to its creator and its similarity to a dinosaur.

The dominant culture of Willosaurs live on their home planet Tamaran, a Dr. Seuss-style city with multi-colored, rounded buildings. They also retained some of their creator's humor in the Space Stage, where their old enemies were dropped onto the nearby planet Frore, which has no atmosphere; thus, the creature exploded.

Although the Willosaur was not the first creature ever created in Spore (the first-ever was the Debug Squid), it is the first to ever be fully used and go through every stage of the game. The GDC video has a full gameplay footage of the Willosaur on YouTube.[1]

The Willosaur was created on March 11, 2005, at the Game Developer's Conference, started its evolution in the aquatic world as a cell, then a mosasaur-looking creature, and quickly and ultimately evolved into the modern incarnation. Its spine shifted up, and a prehensile hand was attached to the end of its tail. The two flippers became legs, and a new front leg appeared on the chest. The creatures eventually developed sentience in the Tribal Stage, and were seen performing a "spear-dance" to applause from the GDC audience. The Willosaurs developed technology early, possibly attributable to Will Wright's likely possession of a debugger.

As of today's Spore, Willosaurs are nowhere to be found as a creature in the Sporepedia. However, they appear mostly as an "Easter egg" throughout the game. The Creature Stage Unlocked achievement has an icon of a Willosaur, and it also appears in the Spore Glyphics. Two creatures created by Maxis also resemble a Willosaur very closely; these go by the names of Tripod Neuvo and Mini-tri.

Willosaur as a cellular organism.

Willosaur in the Creature Stage, being pursued by a Tick.

Willosaur in the Tribal Stage.

A render of the Aquatic Willosaur, or as it's referred to in GonzagoGL's files "swimmingtripod", edited to have its mouth open.

The Willosaur in its glyphic form 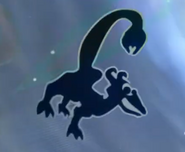 A Willosaur appears in the Spore introduction cinematic.