The X-9 Advanced Reconnaissance Starfighter is a model of heavy starfighter developed and utilised extensively by the United Republic of Cyrannus during the Great Cyrannus War, and later by the Cyrandia Resistance and the New Republic Remnant during the Second Great Cyrannus War. Armed with two wing-mounted heavy laser cannons, the X-9 Advanced ReCon is capable of engaging enemy capital ships, with two aft-mounted lighter laser cannons contribute to a fighter infamous in the galactic battlefields of Cyrannus.

A multi-role strike fighter manufactured in the tens of thousands during the First Great War, the X-9 Advanced ReCon fighter was broadly distributed across the Cyrandia Cluster, and while it was phased out by the Empire upon the conclusion of the conflict, it continued to see service among rebel and mercenary groups, most famously in the case of Recon Squadron, led by Colonel Perreri Ackdool. A First Great War-era squadron of starfighters was acquired by the New Republic Remnant in the aftermath of the Fall of the Twelve Worlds, and with the destruction of the armada's X-15s, these heavy modified X-9 Advanced ReCon fighters are deployed as the Remnant's primary fighter force.

The X-9 Advanced Reconnaissance Starfighter entered service during the first year of the Great Cyrannus War in 03 BNE, incorporating design improvements spearheaded by earlier Viperae-class starfighters utilised since the Trucinex War. Throughout Cyrannus, Advanced ReCon fighters deployed from venerable Venator-class Star Destroyers clashed with automated Confederate starfighters, earning a fearsome reputation as one of the galaxy's most deadly starfighters.

After the end of the war and the subsequent rise of the Galactic Empire of Cyrannus, the ReCon fighter was phased out of production in favour of the more cost-effective ASP-line, though many squadrons fell into the hands of disparate groups of rebels throughout the Cyrandia Cluster. One such group was Recon Squadron, named after the Advanced ReCon Fighter, and under the command of the Mon Nahdar officer Perreri Ackdool. When Recon Squadron joined the larger Cyrandia Resistance, the group's Advanced ReCon fighters were deployed across space, undertaking many of the Resistance's most important campaigns against the Empire.

In the weeks after the Fall of the Twelve Worlds, a squadron of ReCon starfighters was discovered by the crew of the Republic starship Aeolus in an abandoned U.R.C. starbase deep in unknown space. With the New Republic Remnant's supply of more advanced X-15s destroyed during the Fall, Commodore Helo Roslia ordered the starbase's complement of fighters to be transferred to the Aeolus, which began to modify them to modern specifications. These fighters, one of which was piloted by the Aldárae agents Kara Inviá and Aoirtae Valaeris proved invaluable in saving the Remnant during the Battle of the Nameless System.

The X-9 Advanced Reconnaissance Starfighter is a heavy-duty multipurpose model of fighter, deployed for both intense battle and long range space missions. Its two powerful engines, unusually large for a fighter of its size, grant it significant thrust in battle, while an advanced hyperdrive allows it operate independently from a carrier—thus resulting in its class being termed "Reconnaissance" by the Cyrandia Resistance. It is manned by a crew of three: a pilot, co-pilot, and a tail gunner, who operates the medium laser cannon mounted aft of the cockpit. During the Battle of the Nameless System in 17 NE, Aoirtae Valaeris expertly piloted a ReCon starfighter against the Empire, while Kara Inviá mounted the aft cannon, with the two Aldárae inadvertently proving the usefulness of the craft against the Empire's more advanced strike craft. Its nose contains long range scanners and sensors, useful for recon missions, while its large wings can fold to minimize drag during atmospheric flight. They are known to execute precision missions against larger capital ships of the Empire.

“Commander SEVINE, K., Commander SELANIUS, A. and Subcommander T'RAN, V. led a ground team to the station, where they discovered two squadrons of heavy starfighters [X-9 ADVANCED RECONNAISSANCE]. Given the devastation of our X-15 starfighter squadrons during the Fall [24-Mart/17], I have transferred them to the Aeolus.” 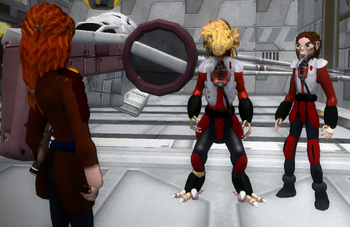 Aoirtae and Kara meet with Commander Sevine alongside a ReCon fighter. 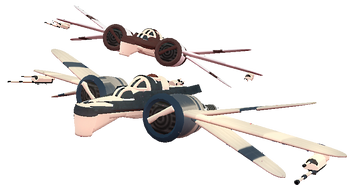