“These new starfighters can handle anything the Empire can through at us.”

The X-15 Nychus-class Starfighter is a highly advanced multipurpose starfighter developed and fielded by the New Republic since the first year of the New Cyrandia Wars. Armed with extreme speed, devastating weaponry and an easily modifiable structure, the Nychus is a favourite amongst the pilots of the Republic Navy. The fighter is known even in the Empire for its exceptional combat performance and aptitude at dogfighting, carrying out bombings and providing air support, with many military analysts believing it to be superior to the fighters utilised by the Imperials. Though they are often carried by larger carriers, the Nychus is also capable of travelling the galaxy without one.

A product of the same line as the X-10 Viperae-class Starfighter, the Nychus-class was developed in tandem with the Caelum-class Shuttle during the first year of the New Cyrandia Wars, when the New Republic was embroiled in border conflicts with civilisations such as the Regellis Star Empire, the Jenassian Regency and the Icolian Assemblage. With the Great Battle of Venetia however, the Nychus-class was finally introduced to see battle during the closing shots of the conflict with the Bisistar Domain and would continue to prove their worth in battle throughout the remainder of the year and into the next, with the success of the fighter being evident during Republic victories in conflicts such as the Sacking of Rihanae in 05 NE.

In 06 NE, reports reached the ears of President Apaltar that X-15s had been seen in the hands of the Cyrandia Resistance, a rebel faction against the Empire. The President promptly ignored the report.

During the Cyrannian Cold War, which saw relations between the Empire and the New Republic collapse utterly, the X-15 received two upgrades in terms of weapon, shield and propulsion capabilities, quickly becoming the mainstay starfighter in the New Republic Navy. In Republic service, a notable event involving X-15s was the Aaenhr Incident in 12 NE, when an Imperial fleet crossed the Neutral Zone and held position over the Republic Space Station Aaenhr-1. The Imperial fleet promptly launched squadrons of the newly developed Romitex-class Heavy Starfighter, with the two fighter groups engaging in a weaponless dogfight, with both sides testing the defenses of the other, while under strict orders not to fire unless fired upon first.

Later in the next year, X-15s fighting under the Cyrandia Resistance played a crucial role in the Battle of Alberensis, gaining aerial superiority over the Imperial forces on the planet in the opening weeks of the conflict, before their numbers began to dwindle as the battle turned into a quagmire with no end in sight.

Powerful, maneuverable and deadly, the X-15 Starfighter are the pride of the New Republic Navy. The most notable physical characteristic of the starfighter is its unique capability to extend its wings mounted on opposite sides of the craft. These wings extend only during combat, thus increasing the range and speed of the laser cannons installed on prongs on the tip of the wings. This feature can be retracted for greater maneuevering speed during non-combat siutations. In addition to its speed, the X-15 is equipped with the latest in Republic starfighter technology, including powerful laser cannons and both conventional and hyperspatial torpedoes. Unlike most Imperial starfighters, the X-15 can operate without a larger carrier, giving it far greater autonomy through which hit-and-run tactics can be employed against an enemy.

“What I wouldn't give to fly one someday...”

“This fighter will be fundamental in the destruction of the Empire!” 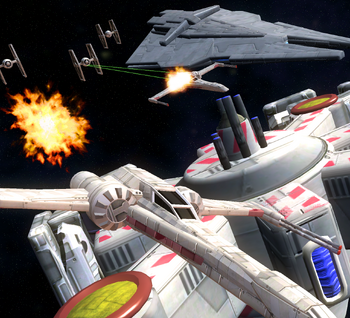 Two X-15s under attack by Imperial forces during the Geopolitical Calamity in 05 NE. 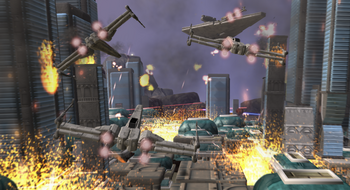 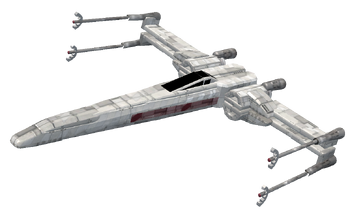