“Quite a ship you've got here, Admiral.”

The Valiant-class Heavy Star Destroyer is a design of battlecruiser originating in the Mirror Universe's oppressive Gigaquadrantic Hegemony. The Valiant-class was one of the final Hegemony ships developed prior to the sudden Xeranbha invasion, and despite being the most advanced vessels in the fleet, they proved ineffective against the "Black Sickness".

In the prime universe, the Valiant-class was one of several designs of warship being developed by the New Cyrannian Republic prior to the outbreak of the Second Great Cyrannus War, which effectively halted production of the ship in favour of established designs. Nevertheless, during the third year of the conflict, Admiral Helo Roslia and the crew of the starship Aeolus acquired the Terroriser, an Imperarchate Valiant, while trapped in the mirror universe. The Terroriser was instrumental in returning the Republic officers to their own reality, and played a crucial role in destroying an Imperial fleet during a critical engagement rimward of Coventina. Rechristened the Resolute, the ship was designated the flagship of the New Republic Remnant.

The Valiant-class Heavy Star Destroyer was first developed by the Gigaquadrantic Hegemony, an imperialist hyperpower native to an alternate universe. Commissioned by Emperor Aedanius I Cretacea himself, the Valiant line was designed primarily for incursions into the prime universe, utilising the Hegemony's superior technology to quell any potential resistance from the major powers of the Cyrandia Cluster. Before these plans could be put into action, however, the Xeranbha invaded the Mirror Universe and quickly forced the dissolution of the Hegemony.

The remaining Valiants, now operating under the flag of a restored Libertan Imperarchate, were withdrawn to Coruaan shipyards, where they were encountered by the crew of the Republic starship Aeolus, which became trapped in the Mirror Universe due to a subspace anomaly near the Harborage wormhole. Admiral Helo Roslia, desperate to find a way home for his crew, confronted Aedanius on his flagship, the Valigon, and with the help of Aoirtae Valaeris, managed to subdue him. Promising the Emperor information on how to stop the Xeranbha, Roslia successfully gained command over the Star Destroyer Terroriser, but before he could keep his end of the bargain, the Imperarchate fell to a Xeranbha saucer.

The newly-rechristened Resolute promptly opened a wormhole to the prime universe, where it and the Aeolus, played a crucial role in defeating an Imperial fleet rim-ward of Coventina. Armed with more advanced technology than the Imperials, the Resolute quickly destroyed much of their armada in a display of power which reverberated across Imperial-occupied space. The Resolute subsequently became the flagship of the New Republic Remnant, commanded by Roslia himself.

The most advanced and heavily armed vessel in the New Republic fleet, the Valiant-class Heavy Star Destroyer utilises the military technology of the mirror universe's Gigaquadrantic Hegemony, and counts among the most powerful ships of its type in the Cyrandia Cluster. Aesthetically, the Valiant most closely resembles the venerable Venator-class Star Destroyer, though generally fulfills roles more suited to a battleship rather than a carrier. Nevertheless, the Valiant has several hanger bays located in different areas of the ship, including the primary hanger on the ship's bow.

“The resourcefulness of the rebels is to be expected. It remains unclear where they acquired such an advanced vessel.” 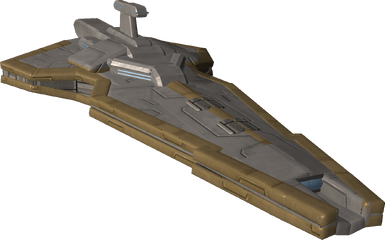