“Aye, blew through three Imperial Asps with my trusty fighter, even with a damaged engine and wing. Hard as my grandmother's teeth to produce and repair, but once you get a-flyin', none of these soft-bellied fools can stop you.”

The StarSerpent-Class Fighter Platform is the main fighter of the Mendel Pact, and several of it's splinter groups, which is used to counter bombers, and developed after Battles alongside the New Cyrannian Republic, and inspired by X-15 Nychus-class Starfighters deployed by their allies, and developed to keep up with new powers and fighters deployed by their allies, so they could provide not only good support for their advanced allies, but also defend their territory from aggressors who would be more advanced then the Mendel were in battle at the time with their outdated "Tara-class Fighters", who were slower in battle, had outdated armor and poor shielding.

StarSerpent-Class Fighters are main fighters of the Mendel, using heavy laser canons to blast and burn their way through other fighters and interceptors, while using specialized Buzz Droid swarms to eat away and destroy other fighters in battle. The pilots of these are similar to the Warriors on the ground, strong, proud, prone to painting their ships with various designs, and eager to fight any foe that can challenge their foes in battle.

The StarSerpent-class Fighter was developed and built in the shipyards of Ugandalore, after the Battle of Venetia in Cyrannus Galaxy, after the clash between the Republic and the Bisistar over the world. The Mendel, seeing how outdated their Tara-class fighters were, and impressed by the X-15 Nychus-class Starfighter, began to develop a new fighter of their own, in order to keep up with their new allies, and to keep up with other powers in general. The lead designers, as always, were UgandalUnitechCorp, the leading ship designers of the Mendel Pact, and drew inspiration from winged insects, such as the Hawkwind Parasite of their world when designing the fighter's wings and basic layout. This lead to a ship with a smaller piloting pod, and large, protruding wings, that give the fighter it's distinct and alien outline.

Later fighters of this type would be deployed in many warzones of the Pact, and although more expensive to produce and maintain then other, similar ships, such as the ASP Fighter of the Galactic Empire, or the X-15 of the Republic that inspired it. The ship has, with this in mind, served in the Third Great Borealis War, the Second Great Cyrannus War, and was deployed by the Mendel in battles against Pirates around their space and such.

StarSerpents would fall into the hands of numerous groups, including the Tul'kaarin, and Shadow Hunters, the Shadow Hand, leader of the Hunters, constructing a personal star fighter for himself with advanced shielding, weapons and equipment to carry out personal missions, which he christened the Vertigo-class Fighter, a variant meant to carry him from place to place, and to deploy in battle if he so desired. His lieutenant, Code-named Relic, often pilots it with his permission, in his place.

The StarSerpent is designed to be a tough and durable fighter in battle. The fighter acts as a fast, powerful fighter, very difficult to pilot and maneuver, but deadly in the battle once deployed on the field by their commanders. They use twin Heavy Laser canons to plaster their foes with concentrated Pulse and laser rounds to destroy their foes, and two heavy Torpedo canons to finish off targets, or blast away capital ship targets. The fighters are heavily defended, making them slightly less maneuverable then other fighters, but more durable then other fighters, and also boasting a moderate amount of shielding to protect it.

The StarSerpent uses a number of deployable droids, nicknamed Buzz Droids, that, when deployed, will swarm onto and tear down any ship they come into, tearing them to pieces.

StarSerpents, unlike many, are built with a hyperdrive built in, allowing them to move without a carrier vessel, and go on deep space missions without support, and can perform long-range guerilla combat missions for long periods of time without aid. 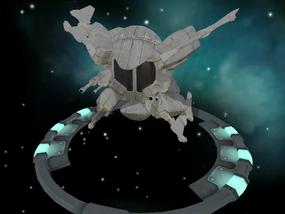 Imperial StarSerpents are used by the Imperial Mendel for carrying out war against the Pact, the Resistance, the Republic and whoever else stands in the way. Though recolored to mimic ASP fighters, they are just as dangerous and powerful as before, now upgraded with a mixture of Imperial, Mendel and even Vartekian designs with their shielding and weapons. 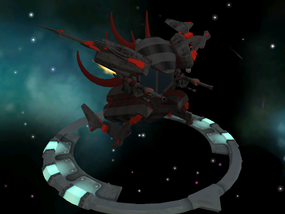 The Tul'Kaarin variant is noted for the six spikes along it's back, meant to look more fearsome, and invoke the tendrils of Xizothano Ada. It's weapon systems are upgraded to be more powerful and destructive, but causes it's shielding to be slightly weaker. In the atmosphere, it's engines are designed to sound like horrific screaming.