Varies, depending on the civilan craft

Varies on the type of craft

Rambo Nation civilian crafts are space crafts not commanded by personnel of Rambo Command, instead they are used by the civilians of Rambo Nation, made up by the various Species calling Rambo Nation their home, some are independant employees others are employed by cooperations. 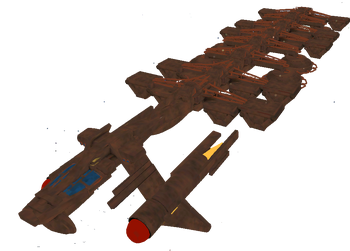 The B-class freighters are as old as the A-class freighter, build in the early days of Rambo Nation and still in service and a common sight for trade. The front section, the actual ship with the warp naccelles is rather small, about 90 meters with few accommodations like a kitchen, engine room, crew quarters and the bridge. The ship is unique as it can make itself as lenghty as required, making it possible to ferry large amounts of cargo with use of a single ship. The back a lock connects the various cargo compartments, the containers can only transport goods and material, while the cilinder containers can transport all kinds of liquids, from water to oxygen and plasma.

A newer ship in service, introduced in 0 BQF shortly after the Second Galactic War and over the years must replace the older dagger shaped transport used by Rambo Nation and originally created by the Serindia. Since 06 AQF a common transport for civilians, the vessel provided accommodations like quarters, restaurants, a cinema, a small swimming pool, a living room with casino possibilities and a panorama view. The ship can carry over 450 civilians, with four decks reserved for sleeping quarters, all with their own restrooms. You can book tickets for common, first and premium classes, the more you pay the more the travel will be "all-inclusive".

It is known that some wealthy scientist use this vessel for scientific exploration as well, then a minimum of 2 personnel is required to operate the ship.

The Aria-class is small civilian private shuttle that can be owned by Quadrantians, fast and armed these crafts prove a menace for law enforcers or larger vessels. It is a shuttle designed for travel from planet to planet, needs to be resupplied and refueled at every stop. The shuttle houses small accommodations like a single bedroom with a staple bed, a small living room with a kitchen and a small restroom.

Since 06 AQF, the Aria-class is also seen among Rambo Nation civilians, gaining a large popularity among the more wealthier as a sign of prestige, as well as among criminals who use them to do races, both in space and between the towers of cities.

The Gwyllioen-class freighter shuttles are in origin a Serindia design, populair within Rambo borders these larger shuttles are often called space freighters, commonly seen among traders, criminals and the wealthy. The Gwyllioen class is not very agile nor fast, but with the right pilot the ship can evade enemy blaster quite well. The class is equipped with a small bridge, a small hangar bay with escape pods, two sleeping quarters for personnel or passengers as well as a living room with a kicthen en a shared restroom. The class is equipped with shields and offensive weaponry like two blasters and 4 photon torpedoes. It can use warp and hyperspace jumps. 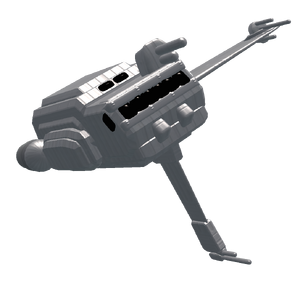 The light freighter type are crafts build originally by the slavers of Sanderhal, though since 0 BQF it became a common sight among many nations and empires, among them Rambo Nation. Equipped with limited shielding and powerful blasters, fast engines it can defend itself when required. With a bridge, various accomodations and a cargo bay these ships became a prefferable ship for traders, smugglers and criminals as they are said to be able to outrun a Constitution-class.

Claire Rambo was given a confiscated freighter by Rambo Command, known as the Falcon.