The Providence-class Dreadnought, more commonly known as the Confederate Dreadnought, is a powerful warship developed by the Confederacy of Allied Systems during the Great Cyrannus War, seeing service throughout the conflict and continued deployment by the Confederacy of Free Planets in decades since. The Providence-class traces its design dates back to the Second Galactic War, when the Imperial Alliance used some of the dreadnought's predecessors' in battles against the allied forces, based on designs utilised by the Mortalitas.

The Providence-class was later introduced late in the first year of the Great Cyrannus War, where it was utilised to great effect against Republic battlefleets. Such was the lethality of the design, that it later inspired the Dreadnought-class utilised by Rambo Nation. With the collapse of the Old Confederacy in 01 NE, and the rise of the Galactic Empire, a handful of Providence-class warships remained in service to various Confederate holdouts, the most notable of which eventually became the Confederacy of Free Planets under General Taros Cassynder. Under Cassynder's leadership, the New Confederacy began creating new Dreadnoughts, fully upgraded to match the Empire's deadliest Star Destroyers.

The origins of the Providence-class Dreadnought can be traced back to Mortalitas designs first deployed during the brief Mortalitas War against the Capricorn Sector Alliance in the decades prior to the outbreak of the Trucinex War. This design would be echoed by the Imperial Alliance during the early years of the Mortalitas' membership in the organisation, which would in turn lead to further iterations during the era of the Confederacy of Allied Systems. Developed by Mortalitas shipwrights in cooperation with rogue Hipaca, and constructed primarily by Cainceron Engineering Docks in the Arathamii Sector of the Outer Rim, the Providence-class would first see service during the first year of the Great Cyrannus War.

Throughout the First Great War, the Providence-class proved to be a capable flagship during most Confederate fleet movements, proving to be a deadly challenge to the smaller and less heavily armed Republic Venator Star Destroyer. During the final stages of the conflict, General Zillum commanded a Providence-class he named the Lucid Voice, which commanded Confederate fleets at a plethora of key battles, such as the Battle of Carindes, Taracondor and the final Battle of Orbispira, during which the ship was destroyed. With the end of the war and the rise of the Galactic Empire of Cyrannus, most Providence-class dreadnoughts were melted down into slag by the Empire, or sold on the black market to pirates and slavers. A handful however, fell into the hands of General Taros Cassynder, who sought to re-establish the fallen Confederacy.

Measuring 2,500 metres in length, the Providence-class was far larger than Republic ships of the line during the First Great War, and almost rivals the sheer size of the Imperator-class Star Destroyer. Indeed, while classified as the Star Battlecruiser by the Cyroenian system, in a show of quiet defiance, the Confederate designers on Cainceron developed their own system of ship classification, in which the 2.5 kilometre Providence classifies as a Dreadnought.

Sharing the pseudo-organic aesthetic favoured by the aquatic Mortalitas, the Providence is capable of being launched from within the oceans of aquatic worlds, while certain ships are almost filled with water to cater for species more comfortable in such environments. With powerful weapons, armour and shielding, the Providence-class excels as a frontline battleship, but is also capable of deploying large numbers of fighters from its massive hangar bay. 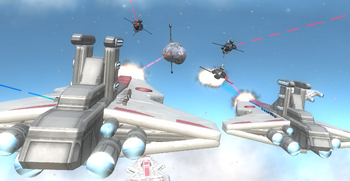 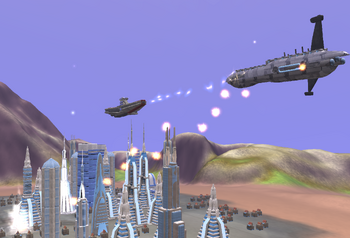 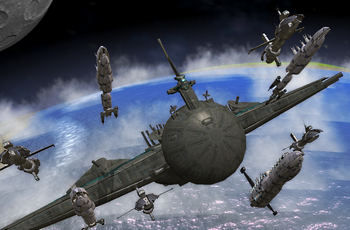 Retrieved from "https://spore.fandom.com/wiki/Vehicle:Providence-class_Dreadnought?oldid=751146"
Community content is available under CC-BY-SA unless otherwise noted.