“A vessel of peaceful exploration and scientific discovery. Though of course, it has sharp teeth should the situation call for it.”

The Presidio-class Star Cruiser is a highly advanced starship class designed by New Republic scientists in conjunction with the famous Doctor Kenders to serve as a cross-faction endeavour between various powers who signed the Mou'Cyran Accords. With a standard crew complement of nine hundred and a length of just under a kilometre, the Presidio-class is far from the largest ship in the First Gigaquadrant, though the technological innovation present on the ship has marked it as a highly successful addition to the allied armadas. Currently, the ship is used by the New Republic, the Polar Crystal Alliance, the Indoctrinate Collective and the Allied Terran Republic, a testament to the popularity of the vessel amongst commanders.

The origins of the Presidio-class Star Cruiser can be traced to the formation of the New Cyrannian Republic, when Republic diplomats approached Rambo Nation in order to request the use of the Shipyards of Rowar to build and design exploration and science vessels independently of the main Star Destroyers used by the Republic Navy. Despite some tensions between the Republic and the Rambo, this request was accepted, leading to the creation of vessels such as the Odyssey-class and the Intrepid-class. These vessels served the Republic admirably, prompting command to access the need for new starships as the New Cyrandia Wars continued to rage.

By this time, the Mou'Cyran Accords had been formed, allowing for joint military manoeuvres and technology-sharing. Though spearheaded by New Republic engineers, the famous Doctor Kenders of joint New Republic/Delpha Coalition of Planets citizenship played a large role in designing the ship systems of the Presidio-class. In addition, several other forms of weaponry and science systems were implemented onto the ship, a collaborative effort by several MCA powers. The first ship of the class, the CRS Presidio was launched from Coruaan Shipyards during a large ceremony attended by President Apaltar, Queen Maryah and other MCA leaders, symbolically agreeing to share the ship design amongst the powers of the MCA, including the Indoctrinate Collective, the Polar Crystal Alliance and the Allied Terran Republic.

The Presidio-class first saw action during the Cataclysm in the Neutral Zone in 05 NE and would continue to serve in conflicts ranging from the Neraida War, the Loron Incursion and various proxy conflicts of the gigaquadrant-spanning cold war.

Though primarily designed using New Republic technology, the Presidio-class is also equipped with a wide range of unique features implemented with the help of many of the Mou'Cyran Alliance's members, including most notably the Apalos. These Apalos-grafted designs include interior materials enabling sections of the ship such as weapon ports and even the command bridge to reconfigure themselves to better serve the crew as required. Some elements of the ship feature dimensional engineering, essentially making some sections of the Presidio-class larger on the inside than on the outside. In addition to a New Republic Artificial Intelligence, the ship is also equipped with closed timelike curve computing. This allows the ship's computer to send its computational results continually backwards through time, allowing it to quickly discover enemy code and many other both conceivable and inconceivable threats.

The weaponry of the Presidio-class varies between the variants used by separate factions, though the ship places notable emphasis on disabling enemy ships rather than outright destroying them. Nevertheless, powerful hyperspatial weaponry dot the surface of the Presidio-class, as well as phased tetryon-based beam arrays excellent at weakening even non-phasic shields.

“A symbol of cooperation amongst the members of the Mou'Cyran Accords. A vessel designed for peace but prepared for war is quite apt.”

“Hah! A mere step above a wooden boat.” 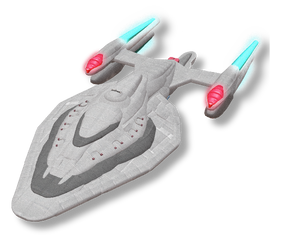