“There is much to respect about the New Republic's new-found prowess for the art of ship-building. Vessels such as the Praesator-class are marvels to behold.”

- High Chancellor Taros Cassynder of the Confederacy of Free Planets.

The Praesator-class Heavy Star Destroyer is a powerful ship design developed by the New Cyrannian Republic in the wake of the Great Battle of Venetia, during which the Bisistar Domain damaged much of the Republic's Inner Fleet. Essentially a larger and more powerful Venator-class Star Destroyer, the Praesator-class represents the latest technologies used by the New Republic in its efforts to maintain stability and peace in the Cyrannus Galaxy and boasts superior shielding, firepower and engines to the other Star Destroyers in the fleet.

Initially conceived as a larger variant to the venerable Venator-class Star Destroyer, the Praesator-class was later upgraded into an entirely new ship class in the weeks after the devastating Great Battle of Venetia during which over twenty Phoebus-class Star Destroyers fell to the overwhelming Bisistar assaults. The loss of so many ships-of-the-line created a major headache for Republic logistical agencies, prompting the launching of the Praesator-class Heavy Star Destroyer two months after the battle ended. The lead ship of the class was the Sword of Peace commanded by Captain Danakar, which was famous for hosting the peace talks between the Galactic Empire of Cyrannus and the Confederacy of Free Planets during the New Cyrandia Wars.

The success of the Praesator-class Star Destroyer led to its extensive use by the New Republic in the various campaigns it faced throughout the early years of its existence, with Praesator-class ships being instrumental in campaigns such as the Corruptus Attack on Cirith Beleg, the Cataclysm in the Neutral Zone and the Sacking of Rihanae.

At first glance, the Praesator-class appears to be an overscaled Venator-class Star Destroyer, being over two kilometres longer. However, the Praesator is a far more advanced vessel and is equipped with more powerful weaponry and non-phasic shielding, meaning that it is also rarer, as it requires a larger amount of resources to construct. As such, they are more often commanded by Commodores or Admirals of the fleet rather than lower ranking captains.

“The borders of the Republic are in safe hands.” 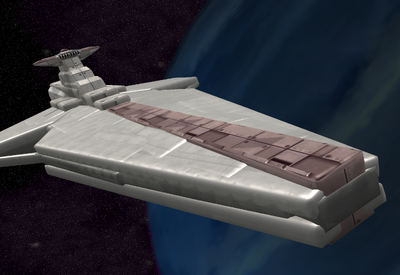 The Sword of Peace exploring a gas giant in the Unknown Regions.

Retrieved from "https://spore.fandom.com/wiki/Vehicle:Praesator-class_Star_Destroyer?oldid=790418"
Community content is available under CC-BY-SA unless otherwise noted.