The Phoenix-class supercarrier is a heavy warship developed by the United Republic of Cyrannus during the Great Cyrannus War, serving throughout the galactic conflict, the Dark Times and in the Navy of the reconstituted Republic. Versatile and durable, the Phoenix-class excels not only as a frontline carrier, but also as a command ship, with the massive carrier's extensive fleet management systems making it a favourite amongst fleet commanders for a near unrivalled efficiency when compared to other command and control starships in the Cyrannus Galaxy. The Phoenix-class is large enough to transport and sustain entire military campaigns, making them a vital strategic resource, the irreplaceable loss of which could potentially rid the Republic of elite servicebeings and material.

As such, Phoenix-class supercarriers are often positioned near the centre of fleet movements, reflecting potential vulnerabilities in broadsides with more heavily armed dreadnoughts. Therefore, the Phoenix-class is often protected not only by a dazzling armament of turbolasers, advanced armour and non-phasic sheilds, but by smaller escort ships which allow the supercarrier to unleash strike fighters and bombers at a phenomenal rate, inarguably contributing to the perception of these supercarriers within the Republic Fleet as flawless instruments of modern galactic warfare. Nevertheless, the Phoenix-class is incapable of taking an extensive amount of damage compared to the Republic's dreadnoughts, instead fulfilling specialised roles within a fleet dependent on the individual modifications of the vessel.

The most distinguished Phoenix-class supercarrier in active service is the CRS Spirit of Freedom, the former command ship of Fleet Admiral Willelmus Cretacea during the Great War, currently commanded by his former first officer Admiral Aradraen. The Spirit often serves alongside the CRS Republica, the flagship of the Republic armada.

The Phoenix-class supercarrier was developed by shipwrights with the newly reconstructed Shipyards of Scorpiae during the Great Cyrannus War. Designed primarily as a colonisation vessel for the Republic's expansion into the outer galaxies of the First Gigaquadrant, the threat posed by the Confederacy of Allied Systems and the Cyrannian Neraida quickly necessitated refits including new and expanded hangar bays and devastating weaponry designed to single-handedly hold off fleets consisting of smaller ships. The first Phoenix-class constructed was the Spirit of Freedom, which served as Fleet Admiral Willelmus Cretacea's flagship after the destruction of the Venator-class Destroyer Resolute. Serving throughout the conflict in battles ranging from the Battle of Koerband to the final Battle of Orbispira, the Spirit of Freedom was considered to be the finest posting in the Republic fleet during the Great War.

When the war ended with the rise of the Galactic Empire of Cyrannus, most Phoenix-class supercarriers were scrapped or delegated to patrols of the Empire's interior. The Spirit of Freedom managed to escape Imperial custody under the command of Cretacea's former first officer, Commander Aradraen, who took the vessel deep into the Unknown Regions, where for a year, they searched for the Republic Remnant. The reunion ultimately took place at the Battle of Amemoriam in 02 NE, when the Spirit arrived over the Oikoumene construct and played a vital role in fighting the Empire and the Neraida, ensuring that the ideals of the Republic lived on.

After the battle, Admiral Cretacea transferred his command from the destroyed Last Hope to the Spirit, making use of the vessel until the establishment of the New Cyrannian Republic and the commissioning ceremony of the CRS Republica, an experimental dreadnought making use of many of the design schematics pioneered for the Phoenix-class supercarrier.

Few Phoenix-class vessels remained in active Republic service prior to the Cyrannian Cold War, with the Spirit of Freedom transferring to the newly promoted Admiral Aradraen once more. With the outbreak of the Cold War, a new generation of supercarriers were pushed into development as an executive order of President Nexarón Valkistair. Older ships, such as the Spirit were sent to the nearest Republic shipyards for an extensive refit, placing the Phoenix-class at the figerative head of the Republic fleet, along with the Liberator and Republic-class dreadnoughts.

Designed primarily as a colonial ship for the Republic's extragalactic expansion into the other galaxies of the First Gigaquadrant, the Phoenix-class was modified extensively in light of the Great Cyrannus War, allowing it to function as an extremely capable command vessel for leading fleets and ground forces during extensive campaigns. Measuring just under nine kilometres in length, the Phoenix-class is smaller than the largest vessels in the Republic Navy, though given the relative rarity of dreadnoughts, the supercarrier is often the largest vessel in whichever fleet it has been assigned to.

Vessels which date back to the original iterations of the class during the Great Cyrannus War, such as the Spirit of Freedom, tend to more durable in design than their modern counterparts, which conversely are equipped with more advanced weaponry. Nevertheless, given the class-wide refit during the Cold War, such deviations are minimal. A highly customisable vessel, Phoenix-class vessels are often designed in such a way that allow for expeditious refits dependent on the nature of the vessel's mission. For example, ships designed primarily for extragalactic colonisation place far greater structural emphasis on provisions such as prefabricated bases and colony units, in addition to capricaforming technologies.

These additions often necessitate the reduction in weapon systems. Likewise, commanders of fully fledged supercarriers often deign to reduce turbolaser and other weapon emplacements in favour of expanded ship production facilities and hangar bays. Such facilities allow these Phoenix-class vessels to refuel ships as large as an Aether-class corvette. 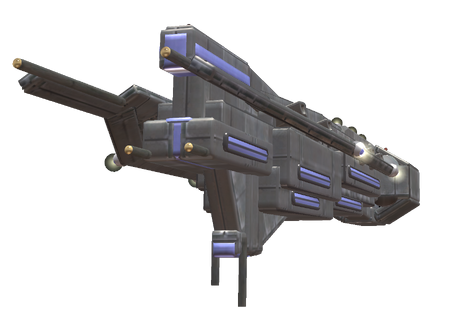 “Some days, I miss my time commanding a Phoenix-class. The crew of the Spirit of Freedom kept me going during the darkest days of the Great War.”

The Spirit of Freedom during the Battle of Koerband.