“One of the most advanced vessels in the New Republic arsenal. Who now denies our power? I challenge anyone who does.”

Alongside the venerable Venator-class Star Destroyer, the Phoebus-class serve as the backbone for the Republic fleet, helping it defend its borders and expand its territory.

At 1,950 metres long, they are the most advanced vessels of their size in the fleet, and under the command of an experienced commander, can often face down any threat short of a massed armada. Armed to the brim with turbolasers emplacements, point defense laser cannons and numerous torpedo launchers, the Phoebus-class excels in combat, though is also designed to act as an exploratory ship and as a test bed for the Republic's latest technologies.

The Phoebus-class Star Destroyer was first planned for deployment by the Republic in Exile in the Quadrant Galaxies after the creation of the Galactic Empire of Cyrannus in order to protect Republic-loyal colonies against the Imperials. However, it wasn't until the formation of the New Cyrannian Republic in 03 NE that the resources needed for development were gained. The first Phoebus-class was launched from the Shipyards of Coruaan several months later, with the vessel ultimately becoming one of the most common Republic vessels operating in both the Quadrants and Coru Secundus.

Defenders of the Republic[]

With the Republic facing threats such as the Regellis Star Empire, the Jenassian Regency and the Icolian Assemblage, the Phoebus-class were put on full deployment, often along the dangerous borders of New Republic space. Serving alongside classes such as the Venator-class Star Destroyer and the Procurator-class Battlecruiser, the Phoebus-class was coined the "defenders of the Republic" thanks to their impressive performance in battle. During the opening months of 06 NE, vessels of the Phoebus-class were recalled to the nearest Republic shipyard, where they received an extensive overhaul giving the vessel a more streamlined appearance as well as more advanced technologies. Prior to this, a select few prototypes of the overhauled Phoebus-class saw action during the Siege of Vasuband in Neochios, 05 NE.

The Phoebus-class is one of the most advanced class of warship in the galaxy. They are powered by a black hole singularity, giving it almost unlimited power, giving its turbolaser output in the petaton range and hyperdrives can work without stopping. Many of these design features originate in joint URC-Delpha Coalition of Planets designs during the Great Cyrannus War. Fueled by exotic matter, its negative mass makes space warp around it more effectively. The hull has been strengthened with hyperdense neutronium, found only on neutron stars while it is equipped with nonphasic shields and a phase cloaking device.

Most Phoebus-class Star Destroyers house about 10,000 individuals, with about 2,500 being active members of the crew the others being either civilians or members of the Republic Army or Diplomatic Corp. Ships are generally also equipped with a complement of land vehicles and starfighters in the event of a protracted battle. However, as it doubles as an exploratory ship, the Phoebus-class are generally more well-furnished than the average military ship in order to cater to foreign dignitaries.

“It's unnerving how quickly the New Republic has emerged as a superpower; with vessels equal to our own...”

“There is only so much diplomacy can do. Some situations call for a giant Star Destroyer.”

“One of the most advanced vessels in the New Republic arsenal. Who now denies our power? I challenge anyone who does.”

“If I ever encounter one, I hope it stand on my side!” 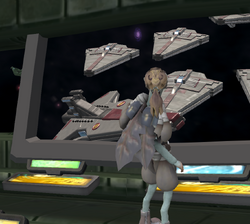 First iteration of the class in use between 03 NE and 06 NE.

A flotilla of Phoebus-class destroyers congregate over an oceanic planet.