“Today we launch the flagship of our mighty Empire, a colossal testament to the power of our civilisation, the majesty of our Emperor and the virtue of our citizenry. We are tasked with the extinction of those who would subvert our Empire, those who would seek to turn us against each other and fan the flames of rebellion throughout our peaceful and orderly galaxy. No more! We will lead the fleets of the Empire against these traitors and put them down like the animals they are! Take heed, the Emperor himself will be paying close attention to the exploits of this ship and its crew, but I have every confidence that you will perform your duties admirably. All hail the Empire! All hail the Emperor!”

- Grand Admiral Carandial during the maiden voyage of the Imperatore

The Nemesis-class Star Dreadnought is a class of super star dreadnought fielded by the Galactic Empire of Cyrannus—the product of a long-running Imperial effort to create capital ships of such fabulously gargantuan proportions that the mere threat of their existence would pacify the both Empire's foes and potentially rebellious galactic regions. As such, the Nemesis-class functions primarily as a psychological terror weapon, by way of a menacing synthesis of world-smashing weaponry and continent-darkening enormity.

Most Nemesis-class Dreadnoughts reach sixty kilometres long, with some, such as the Imperial flagship Imperatore exceeding that. Regardless of size however, all Nemesis-class dreadnoughts are designed to overpower entire battlefleets, with the primary coaxial matto-hyperlaser of the Imperatore once destroying an entire Imperial State fleet in a single shot. Such a devastating weapon is augmented by displacement cannons, light matter cannons, rapid-fire superlasers, heavy dual turbolasers, point-defence laser cannons and heavy proton, vortex and hyperspatial torpedo tubes.

The formal revelation of the Nemesis-class Star Dreadnought, during the first campaign of Grand Admiral Carandial on the Imperatore received equal measures of awe and shock in the Imperial Navy. Some naval traditionalists, already aghast at smaller dreadnoughts such as the Executor-class, regarded these newly introduced vessels as the product of the imperialist ambitions of individual Grand Mandators, rather than that of a coherent military strategy. Nevertheless, the Emperor himself was pleased, personally ordering the construction of a number of Nemesis-class ships, the exact amount of which remains ominously elusive to Republic Stretegic Intelligence.

The development of the Nemesis-class Star Dreadnought represented the most potent reminder of the Oikoumene Emperor Tyrómairon's ongoing endeavour to advance the Empire's technological and military strength through the use of Oikoumene technology. Though first developed in 03 NE, such was the secrecy surrounding the development of the Nemesis that even Grand Admiral Carandial assumed that their existence was a mere rumour prior to gaining command over the Imperatore in 04 NE. The destruction of the Executor-class Illustrious during the Battle of Abrion against the Cyrannian Imperial State provided the Empire with the incentive to finally unveil the class by presenting the up-scaled flagship Imperatore to Admiral Carandial. Travelling to the fringes of the territory claimed by the Imperial State, the Imperatore unleashed a single shot of its matter cannon, utterly obliterating the fleet of Admiral Chathanglas.

Ten other Nemesis-class Star Dreadnoughts, smaller than the Imperatore, were also distributed to the grandest fleets in Imperial space, such as Grand Admiral Scaeva, who commands the Second Expeditionary Fleet from the cavernous bridge of the Nemesis, the formal lead ship of the class. However, it is often said at fleet headquarters on Antemurale that the Outer Rim would have been lost were it not for the sheer power of the Imperatore under Carandial's leadership. During the Siege of Vasuband, the Imperatore was the official flagship of the coalition force consisting of the Empire, the New Republic and Rambo Nation, with the mighty cannons of the flagship sundering countless State cruisers—ultimately snuffing out the last embers of Vasubandian resistance to the Core.

Designed for intergalactic conquest, the Nemesis-class Star Dreadnought is the most powerful starship known to exist in the Cyrannus Galaxy, being equipped with enough firepower to match over a thousand Imperator-class Star Destroyers. Indeed, with the exception of lead ships such as the Imperatore, at sixty kilometres in length, the Nemesis-class Star Dreadnought has internal docks large enough to accommodate dozens of Imperator-class Star Destroyers and as much as two vessels the size of an Executor-class Star Dreadnought. Indeed, specialised vessels are equipped with internal shipyards capable of not only repairing Star Destroyers, but constructing them. In terms of weaponry, the Nemesis-class are equipped with displacement cannons, light matter cannons, a coaxial matto-hyperlaser, rapid-fire superlasers, a space-time metric weapon system, heavy dual turbolaser cannons, point-defense dual laser cannons, heavy proton, vortex and hyperspatial torpedo tubes, as well as a myriad of other weapon systems all but classified by the highest levels of the Imperial military.

“The greatest vessels in the history of Cyrannus and the most potent form of the Emperor's unassailable might.”

A meeting within the interior of the Imperatore 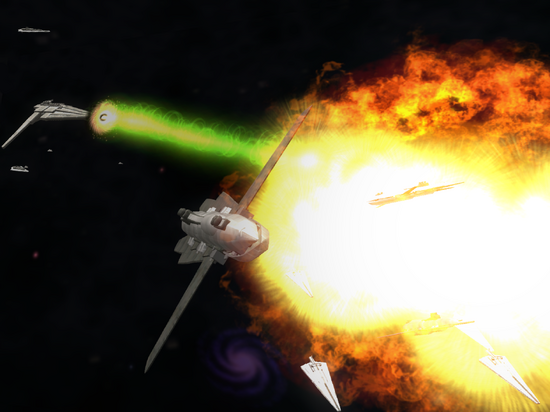 Retrieved from "https://spore.fandom.com/wiki/Vehicle:Nemesis-class_Star_Dreadnought?oldid=718396"
Community content is available under CC-BY-SA unless otherwise noted.