The C.R.S. Mou'Llhei Star (TOR-1202) is an Aether-class corvette commanded by Captain N'vae Celeneos. With powerful engines and weapons, the Mou'Llhei Star is a particularly powerful example of an Aether corvette, augmented for front-line combat with larger turbolaser cannons and additional weapon emplacements. Named after the peaceful colony of Mou'Llhei in Coru Secundus, the Star, as she is affectionately known, first came to prominence during the Neraida War, being the sole survivor of the Battle of Ithriebor and a subsequent participant in Fleet Admiral Willelmus Cretacea's armada during the push into Neraida space.

During the Second Great Cyrannus War, the Star subsequently distinguished herself as a participant in many of the war's most pivotal conflicts, later becoming one of a mere four vessels which remained loyal to President Apollo of the New Republic Remnant after the disastrous Battle of Cognalorilos.

The C.R.S. Mou'Llhei Star was launched in Martex 7 NE, and placed under the command of Commander N'vae Celeneos, who was assigned to the defence fleet of the newly established colony of Ithirebor, relatively close to the New Republic Capital on Mou'Cyran. Though she expected it to be an easy assignment, given Ithirebor's position deep in Republic held space, the Mou'Llhei Star played a pivotal role in the first battle of the devastating Neraida War, being the only survivor when the Neraida Gigamatrix annihilated the colony. Retreating to Lloannen Deep Space Station, Commander Celeneos saw to the wellbeing of her crew and told Republic Command of the destruction wrought on Ithirebor. The Mou'Llhei Star, upon receiving repairs, was later assigned to Admiral Cretacea's armada during the push into Neraida-held space, and participated in the final Battle of the Core, which resulted in the destruction of the Gigamatrix.

Several years later, the Star remained under the command of Celeneos, who had been recently promoted to the rank of Captain and permanently assigned to Admiral Cretacea's Grand Republic Fleet. In this capacity, the Star played a key role in numerous campaigns during the early years of the Second Great Cyrannus War, though it was heavily damaged during the Second Battle of the Mou'Cyran Remnants. Once repaired, the Mou'Llhei Star was briefly reassigned to the fleet of Admiral Laege Shavalera, and participated in the Liberation of Coru Secundus, and later the Battle of Achiliquin.

Once the Mou'Llhei Star returned to serve in Fleet Admiral Cretacea's Grand Republic Fleet, it participated in the Fall of the Twelve Worlds, which ended in the surrender of the New Republic to Imperial forces. Refusing to accept the legitimacy of President Zare'Anne's government, Celeneos and the crew of the Star joined the New Republic Remnant, and fled into unknown space. Several weeks later, the Star survived the Battle of Cognalorilos and once again, remained loyal to Apollo rather than flee the Remnant as most of the fleet did. As such, Celeneos and the crew of the Star accepted the authority of Fleet Admiral Helo Roslia of the Aeolus, and later participated in establishing a base on Harborage.

“Though the Star may be small, she's every bit as vital to the fleet as the Aeolus, the Allecto and the Ardaeinos.” 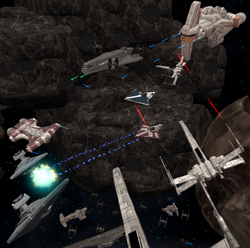 The Mou'Llhei Star, on the upper right, during the First Battle of the Mou'Cyran Remnants.

Retrieved from "https://spore.fandom.com/wiki/Vehicle:Mou%27Llhei_Star?oldid=790189"
Community content is available under CC-BY-SA unless otherwise noted.