“The Daggers of the Empire shall be obliterated by our dreadnoughts.”

Due to their massive size and great power, the Melkón-class are few in number and are generally only commanded by the best of the best within the Cognatus Battlefleet. Though no enemy ship has survived an encounter with these massive Dreadnoughts, Imperial Intelligence has concluded that the vessel is armed with weaponry including an upgraded quark matter disruptor, capable of penetrating nearly all kinds of shield and states of matter. However, despite these overwhelming advantages, the Melkón-class is slow and bulky and thus must rely on fighter support during combat.

Since the Intergalactic War, the Cognatus war machine has been constantly updated with new technologies aimed at preventing a repeat of the near-loss of their civilisation at the war's conclusion. When the Primercer gained control over the Cognatus Empire during the Dark Times, he began to speed up this process, ultimately resulting in fearsome ships such as the Oupavia-class. Though smaller in size, the Melkón-class was introduced the following year as the pride of the Cognatus Battlefleet and as a relentless foe to the many enemies that stand before the Cognatus.

The primary weapon of the Melkón-class is it's quark matter disruptor, or quark-gluon deconfinement weapon. The weapon uses hypermatter decay that induces enough energy for hadrons (i.e. protons and neutrons) pairs to separate, a process known as pair production into new quark-antiquark pairs. At sufficiently high energies, quarks and gluons separate into larger weakly interacting clouds. This state of "glasma" destroys any form of baryonic matter, and is capable of melting structures made out of degenerate matter. The glasma is especially effective against deflector shields, although the shields can reform from diffusing plasma, the glasma is dense enough to reach the hull and destroy it from the subatomic level.
The Cognatus were the first in known history to use the weapon, first seen in the Cognatus invasions of the Plazith Rim. Hypermatter-based power had not been seen outside the Cyrannus galaxy since the precursors. When the first Stavro-class battleships appeared, the great Milky Way powers, including the DCP assembled a defence, only to have it annihilated in the span of seconds by the onslaught of glasma beams. The DCP was surprised by the ability to melt neutron-degenerate matter almost equally well.

In the many years since the invasion, the hyperspace revolution meant that quark matter disruptors had become available to a few other superpowers, and is no longer a new weapon. Despite this, there is no good shielding against the weapon other than the even rarer metric shields and top of the line non-phasic shields. All the crew have to hope for is that their shields can last long enough for them to overwhelm the Melkón-class, an unlikely prospect. The Cognatus have likely sourced their hypermatter-power from ancient technology, giving them the upper hand over most other powers. The weapon is just as devastating as it was when first introduced.

An average Melkón-class Dreadnought is crewed by over forty thousand crewmembers from all Cognatus client species, as well as races enslaved by advancing Cognatus armadas. Unlike most Cognatus vessels which are mostly commanded by Cogsangui, the Melkón-class are often commanded by Draiocht, a humanoid race inducted into the Cognatus in 03 NE, known for their intelligence and skill in battle. In addition to the ship's crew, Dreadnoughts also house entire armies of Cognatus warriors, machines and fighter craft in the event of a protracted land invasion.

“People say an Imperial Star Destroyer is deadly... Well they never faced a Melkón-class Dreadnought before.”

“The strong right hand of the Battlefleet.”

“As far as space-faring vessels go, this design is an apex predator.”

“Let the kirus bring their vast spaceships, their heresy will still be their downfall.” 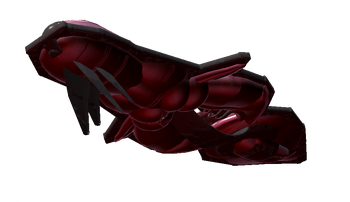 Another view of a Melkón-class.

Retrieved from "https://spore.fandom.com/wiki/Vehicle:Melk%C3%B3n-class_Dreadnought?oldid=718648"
Community content is available under CC-BY-SA unless otherwise noted.