Loron Sik Ships are the largest common class of Da Rogue Boyz' shipz. Armed to the teeth with firepower, and sporting an intimidating face, Sik Ships are a personification of Loron strength in spaceship form: very dangerous, very menacing and very disorganised and chaotic.

Sik Ships serve both as capital ships for bosses and as the main body of a fleet, but are always owned by bosses rich enough to afford them. As such, many bosses personalise their Sik Ships with all sorts of tacked-on weapons, bling and paint jobs to make their ships stand out. Though the base model comes with core specs, added weapons can mean that several ships become far more powerful than others, while poor maintenance or installation can lead many Sik Sips to become weak.

The Sik Ships were first developed during Da Moovment, to attack a New Kralgon Empire planet. The Sik Ships were designed to be similar to Da Propa Big Rogue Krooza and to accompany it, but to be smaller so they'd be easier to use. The design quickly caught on as many bosses all fought one another to own their own.

When the Tralkikianoe gave Da Rogue Boyz technology during Da Rampage, they gave the ship particle cannons and relativistic missiles. As well as this, however, they improved the ships' AI, meaning it could commandeer guns and help out with commandeering the ship in general. Later, the Borealis Consortium Network also improved the ship, by giving it the nanomachines and regenerative armour that the other ships have.

During Da Rogue Era, the Sik Ships saw their greatest improvement drive. After Settlin Da Score, the Loron had conquered the Unified Nation of Ottzello, and could now build Sik Ships made purely of nanomachine regenerating armour. Their weapons were outfitted with more powerful relativistic missiles, and a weapon known as "da Planet Eeta", which could use self-replicating swarms of nanomachines to eat a planet whole and transform it with quantum replicators into materials used to build other ships.

In Da Reckoning, Kal'kuir improved the ships further when fighting in the Milky Way Galaxy. By installing soliton weapons capable of tearing holes in starships and one-way mirror nightshades, which he dubbed "da Solushon" and "da Hood" respectively, the ships were able to rival the Delpha Coalition of Planets. However, this armor and these weapons proved to be extremely expensive, meaning that outside of a few ships fighting in the Borealis Galaxy, very few Sik Ships could be outfitted with them.

Sik Ships are 900m long, with what is designed to look like an angry face at their front. Their larger weapons - their particle cannons - are visible, while the relativistic missile launcher is contained in the 'mouth' of the ship.

Because the bosses take great pride in their Sik Ships, no two ships look the same. This is because of multiple paint jobs, added bling and weaponry that the bosses love to apply to their ships in order to make them stand out.

Sik Ships are often the capital ship leading Rogue Boy fleets, as the largest ship in a fleet is the one leading the attacking fleet. However, most typical fleets are led by Da Propa Big Rogue Krooza. As the leading ship(s), the crewmen will simply blast anything they see. The ships' guns are commanded by both the ships' AI and the volunteer gunners inside.

Sik Ships are constructed using albative nanomachines, meaning they are self repairing and have incredinly tough and thick armour. They are powered, like most Loron ships, through zero-point energy from a vacuum, or when necessary, through plasma fusion reactors producing high outputs.

The base Sik Ship model has access to the following weaponry:

The following weapons are owned by various other Sik Ships on purchase:

All Sik Ships are made of extremely albative metal made of nanomachines, meaning it can self-repair with ease. They all by default use non-phasic shielding, meaning they can withstand many weapon blasts before the shield begins to run out of power or fail and their armour becomes vulnerable.

Several Sik Ships can be outfitted with a nightshade defense known as Da Hood. This is a one-way mirror that can essentially prevent almost anything from getting through the defenses and almost break them from the rest of the dimension entirely, but requires a heavy amount of power. 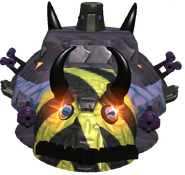 An example of a coloured Sik Ship (1) 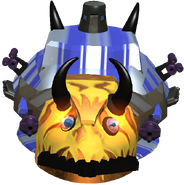 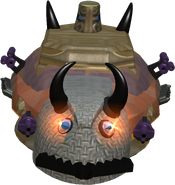