The Liberator-class Star Dreadnought is a large warship developed by the New Cyrannian Republic during the New Cyrandia Wars. One of the largest and most heavily armed ship designa currently in use by the Republic, the Liberator-class was first commissioned in the months after the Sacking of Rihanae, leading many to suspect that rather than to fend off the forces of the Rihanae Pact, the Liberator-class was designed to compete with the dreadnoughts of the Galactic Empire of Cyrannus - a potent symbol of the cold war many considered to be developing between the two superpowers.

The appearance of the Liberator-class is a departure from the typical wedged shaped design favoured by the Republic, instead being evocative of ancient ships utilised by the First Republic thousands of years prior to the Great Cyrannus War. Designed with many of the advanced technologies utilised on the experimental flagship Republica, ships of the Liberator-class typically serve as flagships of their assigned fleets, being heavily armed, shielded and capable of coordinating large numbers of smaller vessels. As such, the strategic importance of a single Liberator-class is valued by Republic Command, who generally assign only the veteran and the elite of the Republic Navy with many years of experience in combat to these mighty vessels.

Officially, the Liberator-class Star Dreadnought began development on 46-03-05 NE in the immediate aftermath of the Cataclysm in the Neutral Zone to, in the words of President Apaltar's press release, "ensure that no enemy, be it demonic or despotic can trample on our ideals of democracy and fair representation". The wording of the press release piqued the interest of many political commentators, who theorised that the new dreadnought class was being designed in part to deal with a potential war with the Empire. After months of development at many top secret Naval installations, the first Liberator-class Star Dreadnought Star of Cyrannus was revealed to the public at Coruaan, where Fleet Admiral Gialu Kaedar pledged that a new age of greatness was beginning for the New Republic.

Unlike most ship designs favoured by the New Republic, the Liberator-class Star Dreadnought has a significantly more bulbous and organic appearance evocative of both First Republic and early Federation of United Worlds vessels as well as the star cruisers utilised by the Mon Nahdar. The central section of the vessel houses massive turbolaser and hyperlaser batteries designed for large capital ship broadsides with the command tower being placed closer to the fore of the ship, which is the most heavily shielded section of the vessel. In addition, several hangar bays can be found on each side of the ship capable of launching several squadrons of starfighters during engagements. Despite the size of the ship, its powerful engines allow it to be far faster than Imperial vessels of a comparable size and though the Empire's Star Dreadnoughts often eclipse the size and weaponry of the Liberator-class, the Republic vessels outmatch their Imperial equivalents in terms of speed and defences.

Like all Republic ships, the exterior of the Liberator-class is emblazoned with Republic red against a white hull.

“No more shall the Republic be at the mercy of those who seek to do us harm. These vessels, the most advanced in the fleet will be a beacon of light in the darkness of space to the weak, the disenfranchised and the conquered and will ensure that no enemy, be it demonic or despotic can trample on our ideals of democracy and fair representation.”

“It is true what they say, serving on a Liberator-class is a sure sign that you're getting old.” 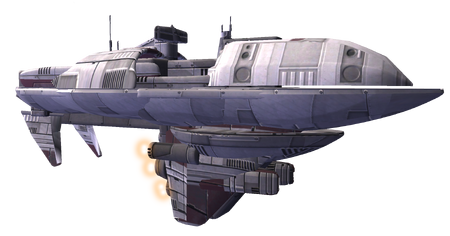 Retrieved from "https://spore.fandom.com/wiki/Vehicle:Liberator-class_Star_Dreadnought?oldid=790420"
Community content is available under CC-BY-SA unless otherwise noted.