“I miss the time when the construction of this starship was a secret. Our agents in the Intelligence were so eager to tell all the intricate details about the vessel to each other - I almost feel sorry for those for whom the unveiling of this mighty weapon was spoiled. Almost.”

The Judicator-class Star Battlecruiser is a highly advanced model of Star Destroyer developed and introduced by the Galactic Empire of Cyrannus during the Cyrannian Cold War. Introduced a decade after the unveiling of the Imperator-class Star Destroyer, the Judicator-class represents the latest in Imperial shipbuilding, being twice as large and fielding more advanced technologies. Reflecting a renewed appetite amongst Imperial tacticians for capital ships that double as super carriers, vessels of the Judicator-class carry five full wings of starfighters, squadrons of replicating drone fighters and a full complement of assault ships.

While the sheer size of the Judicator-class reflects an evolution of Imperial Star Destroyers, the class also recalls certain design aesthetics of the venerable Venator-class, including a dorsal flight-deck as well as port and starboard hangars, allowing for quicker fighter launch times. Reflecting design evolution from the Imperator-class, the Judicator-class has a less prominent bridge, thus incorporating lessons learned from the New Cyrandia Wars.

While the Imperator-class remains the mainstay of the Imperial Navy, the Judicator fields far more powerful weaponry capable of reducing planets and enemy ships alike to slag, making use of over five thousand heavy rapidfire turbolasers, two thousand ion cannons, one hundred superlaser projectors and a multitude of other weapon systems classified by the highest levels of the Imperial admiralty. As such, Judicator Star Destroyers are almost exclusively commanded by capable Imperial veterans.

The primary shipyards involved in the development of the Judicator-class Star Destroyer are located in a nearly explored region of the Unknown Regions, away from the prying eyes of Republic spies, all too common in the era of the Cyrannian Cold War. The Judicator, the flagship of Grand Admiral Mortalagueis, was the first Judicator-class commissioned, entering service in 08 NE, three years prior to the official unveiling of the class to the Imperial public in 11 NE. While the unveiling of the Judicator-class did not diminish production lines for the Imperator-class Star Destroyer, they soon became the preferred command ship for the Empire's best and brightest as the Cold War with the Republic began to heat up.

The Judicator, under Mortalagueis, first saw service during the brief war against the Capricorn Remnant Alliance, when it led the Imperial armada during the Battle of the Alliance Hubworld. The prototype battlecruiser effortlessly swatted down the outdated vessels utilised by the Remnant Alliance, with minimal damage to the shields. Several years later, the battlecruiser entered active production, with the Desolator under Captain Mornauó becoming particularly infamous in the years leading up to the outbreak of the Second Great Cyrannus War in 15 NE.

Designed to instil fear into the hearts of the Empire's innumerable enemies, there are few threats that a single Judicator-class - no less a flotilla - cannot overcome. Compared with the Imperator-class, the Judicator-class is larger, deadlier and significantly more efficient in terms of power regulation, thus allowing for superior non-phasic shields and a considerably more advanced coronadrive. As such, the Judicator-class is considered by Republic Intelligence to be among the most powerful warship designs in the galaxy, possible outmatched only by larger Republic and Imperial dreadnoughts, though this should not belie the unmatched weapon systems for a vessel of its size. Though larger than the Imperial Star Destroyer, the Judicator-class has a more sleek outline, thus presenting less of a target to potential enemies, simultaneously optimising shield protection of critical systems such as the bridge, which in turn is closer to the superstructure when compared to other Imperial warships.

With a ventral, dorsal, port and starboard hangar bays, the Judicator-class excels as a carrier, carrying forth untold waves of both manned and unmanned starfighters, the latter of which self-replicate during battle, providing the Star Destroyer with a fighter screen which protects against enemy bombers. In addition, an advanced interdiction field generator - like most Imperial capital ships - is located in the reactor bulb located on the ventral hull, thus allowing the ship to both pull ships from hyperspace and prevent retreat into it. Perhaps the most fearsome feature of the Judicator-class are its weapon systems, which include rapid-fire heavy turbolasers, ion cannons, superlaser projectors, hyperspatial missile launchers and matter cannons, all of which optimise fleet actions, patrol and planetary annihilation.

“The damnable Republic has nothing in their pathetic arsenal that can stand against our new battleships. The proof will present itself soon. Very soon.”

“The Empire still considers us defenceless. Good. Their hubris will be their undoing.”

“I miss the time when the construction of this starship was a secret. Our agents in the Intelligence were so eager to tell all intricate details about the vessel to each other - I almost feel sorry for those for whom the unveiling of this mighty weapon was spoiled. Almost.”

“No matter how deadly this new starship's weapons might be, it will only be as powerful as the one who helms it. Even the mightiest vessels won't be worth a damn if their captains are undisciplined cowards! Weak, sorry men who lose their minds to fear and break their own control panels out of rage the moment they face any complication on their tasks! It is paramount that only the most loyal and level-headed of our Navy are given command of these new ships.” 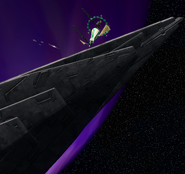 Retrieved from "https://spore.fandom.com/wiki/Vehicle:Judicator-class_Star_Battlecruiser?oldid=755390"
Community content is available under CC-BY-SA unless otherwise noted.