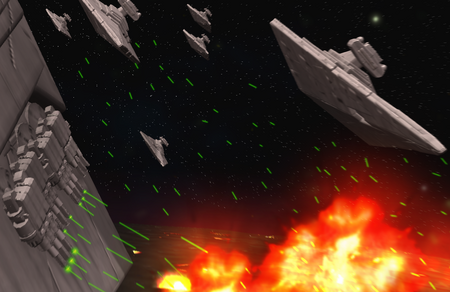 “When an enemy looks upon one of these new Star Destroyers, they generally dismiss any attack made upon one as suicidal. And after seeing what a single ship can do to a planet, they have good reason.”

The Imperator-class Star Destroyer is an iconic class of Star Destroyer utilised by the Imperial Navy, representing the inviolable might and will of the Galactic Empire of Cyrannus. Developed toward the end of the Great Cyrannus War by the United Republic of Cyrannus, the chief designer of the vessel, Tira Mizio sought to echo the great spacefaring cruisers of the ancient Phaedric and Nagith Empires, as well as the First Republic, seeking to restore a sense of grandeur and scale she felt had been lacking with more modern vessels. However, with the rise of the Empire, the vessels came to embody the strength and naval superiority of the Empire.

It is estimated that the Empire currently deploys over thirty thousand Imperial Star Destroyers throughout the First Gigaquadrant, with the vast majority located in Cyrannica, with smaller Star Destroyers being more common in the Empire's extragalactic territories. Indeed, while the Imperator-class is no longer the largest vessel in the Empire's arsenal, it remains the most iconic, as well as the most feared, with its dagger-like profile casting a long shadow over the free worlds of the Gigaquadrant. Though primarily a battleship, the Imperator-class is also a capable carrier, carrying a large complement of starfighters, generally of the ASP line, shuttles, heavy and light ground assault walkers and replicating drone fighters. In keeping with Imperial Naval doctrine, however, their role as ships of the line supersedes such considerations, being designed to force entire systems into submission through their mere presence.

While Imperator-class vessels are common vessels along the spacelanes of Cyrannus, they remain a vital resource for the Empire, with the loss of a single vessel often proving to be headache for sector command staff. As such, standard Imperial fleet formations observed by the New Republic have noted that Imperator-class ships tend to remain close to the centre of flotillas, protected by frigates and waves of Starfighters. Nevertheless, individual ships such as the Accuser under Gaius Prentus, the Chimaera under Henera Medé and the Inexorable under Tharnak Adraci have proven to be nigh-unstoppable forces in battle, their names cheered across the Empire.

The design of the Imperator-class comes from the second year of the Great Cyrannus War when designers of the previous Star Destroyer designs of the URC noticed the numerous causalities they were facing against such threats as the Confederacy of Allied Systems and the Cyrannian Neraida. They approached Apollo, the current president with the designs for a new Star Destroyer, one that would ensure the Republic's military dominance in the galaxy. Apollo brought the designs to the Senate who debated over the design. Many seemed to want the Republic to have a more potent military presence, while others saw the design as too ambitious and expensive. In the end, those in favour of the ship won out and the final preparations in its design ended and construction began in secret high over Cyroenia. In the final months of the war, preduction lines for the Imperator-class increased while those for the Venator-class decreased.

When Emperor Tyrómairon declared the Galactic Empire of Cyrannus at the end of the final year of the war, the Imperator-class eventually came to render the Venator-class obsolete, though many captains such as Mortikran continued to use them well into the Dark Times. These massive ships eventually came to personify the presence and might of the Empire across Cyrannus, and indeed beyond. By the second year of Imperial rule, Imperial Star Destroyers soon became the most common Imperial vessel with millions being fielded across Imperial controlled space. However, their reign as the most powerful warships in Cyrannus were soon usurped by the larger Star Dreadnoughts, such as the Executor and Assertor-class Dreadnought. Nevertheless, they remained as the most potent symbol of the Empire's ultimate military power over all species in Cyrannus.

In 02 NE, vessels of the class were recalled at varying points to the nearest Imperial Starbase, where they were equipped with the experimental rapid fire superlaser, a devastating weapon aimed at cracking open planetary crusts without the need for an entire fleet. In addition, two years later, Star Destroyers of this class received a new update known simply as "Corona", which included the installation of devastating new weapon systems as well as the latest updates in Imperial shielding and propulsion technology. During the Second Great Cyrannus War, as befitting their role as the line ships of the Empire, Imperial Star Destroyers became ubiquitous throughout the Gigaquadrant, during Imperial campaigns against the New Cyrannian Republic, the Delpha Coalition of Planets, as well as countless other civilisations united in opposition to the Empire.

A massive warship, the Imperator-class Star Destroyer generally averages about at 2,704 meters long (8,530 feet). Compared to most previous Cyrannian ships, this is a massive size which serves as one of the Star Destroyer's key weapons; psychological terror. Senator Guolivian once commented after witnessing the Star Destroyer that any attack made upon one would be suicidal. Nevertheless, the Imperator-class is by no means the largest in the Imperial fleet, with some of the larger Star Dreadnoughts such as the massive Nemesis-class being capable of launching these planet-killers as if they were fighter craft.

The Imperator-class is armed to the brim with a lot of advanced weaponry, being a conglomeration of Mortalitas, Basileus, Republic, Corthrinus, Vartekian and possibly some Mornûnendur designs. It's superstructure is doted with Tractor beam projectors and thousands of heavy, medium and light turbolasers. Torpedo systems installed on the Imperator-class include vortex torpedoes and hyperspace missile launchers, both of which can travel across entire galactic sectors to destroy unshielded targets by materialising inside potential enemies. In 02 NE, scientists installed a rapid-fire superlaser into the hangar bay of all Star Destroyers, which is powerful enough to crack open a planet's crust and decimate entire enemy fleets.

In addition, Imperator-class Star Destroyers are also equipped with classified weaponry such as the near-mythical Space-time Metric Weapon System, which when launched alters the very dimensionality of space-time around the target, warping the cosmos in a cataclysmic implosion designed to completely annihilate entire enemy fleets in the blink of an eye. In addition, beginning in 04 NE, newer models are equipped with devastating displacement cannons, gigaton-range weaponry capable of punching holes in planets or indeed, enemy ships.

They are also equipped with some of the strongest shields in the Gigaquadrant, namely an Imperial designed hybrid between metric and non-phasic shielding technology. The model also carries about seventy five individual ASP Fighters, as well as Sentinel and Korvalus-class shuttle craft..

While interdictor cruisers have been a mainstay in Cyrannian fleets since the introduction of the Restrictor-class Star Destroyer by the United Republic of Cyrannus, it was the Interdictor-class Star Destroyer which revolutionised the concept when it was introduced in 03 NE. While previous vessels had the singular purpose of erecting gravity wells to interdict hyperspatial travel, the development of the Interdictor-class as a variant of the Imperator-class utilised its base design to function additionally as a front-line battleship, albeit one with reduced offensive capabilities. 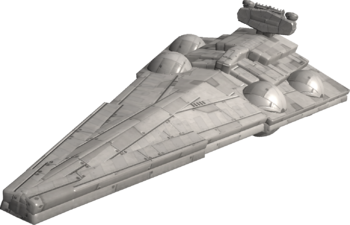 The installation of the four massive gravity well projectors necessitated the removal of many of the turbolaser batteries and weapon emplacements found on the Imperator-class, though the designers ensured that the design could hold its own in combat, particularly during operations involving pulling enemy craft out of hyperspace to destroy them in realspace.

Since the introduction of the class in 03 NE, and the subsequent refit in 12 NE to account for the latest developments in Republic hyperspatial technology, the Imperial Navy tends to assign at least one Interdictor Star Destroyer to each fleet, where it can be used to trap enemy vessels by creating artificial gravity wells and interdiction fields, preventing them from escaping Imperial justice. While dangerous during solo operations, the Empire has been known to deploy multiple vessels to interdict hyperspatial travel across entire star systems, perhaps most notably exemplified during the Siege of Vasuband during the New Cyrandia Wars. Indeed, the bulk of Imperial Interdictors are currently deployed along the Neutral Zone with the New Republic, where their presence could effectively hamper any potential Republic invasion into Imperial territory.

“At one stage, I thought these awe inspiring vessels would ensure the Republic's survival. Now, they may signal its very end.”

“Hahaha! With these vessels, rebels will tremble in fear!”

“Watch as the might of the Colossus enforces the Emperor's law in this unruly land.”

“A terrible weapon of mass destruction, thee must tremble at her approach!”

“Power stems from fear. And THIS spaceship is fear incarnate.”

“An outstanding masterpiece of a battleship, by any standard. If only it where used for more noble purposes, and by a more noble people.” 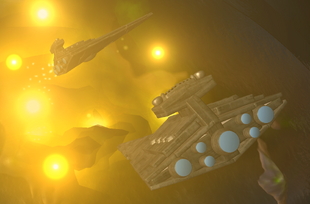