“Do not provoke my ire, or that of my worthy kin, lest the Herald darken the skies of your world.”

The Herald of Retribution is a Cognatus assault carrier both renowned and feared as a harbinger of the Unified Order of Cognalorilos. The only ship of its class in active duty, the Herald as it is informally known, was first introduced during the opening stages of the Intergalactic War to serve as the command ship of the then Fleetlord Voro Acetenus, being the vessel he usually utilised during his campaigns in said conflict. After the cessation of hostilities, the Herald of Retribution remained in the shadows despite presumably remaining under the core fleets aligned with Acetenus, only emerging in 05 NE upon the creation of the Unified Order of Cognalorilos.

Though other assault carriers of the Herald's design have generally been decommissioned by both the Cognatus empire and Order in favour of more advanced vessels, New Republic fleet units during joint naval exercises with the Herald reported significant improvement in the vessel's capabilities in terms of both weaponry, hull plating and shielding, marking it as one of the most powerful vessels currently fielded by the Cognatus Order.

Though the official command ship of Primarch Acetenus, the Herald is more often commanded by Shiplord X'elorn Tolahven who acts as the one of the Primarch's most trusted emissaries and military commanders. During the Neraida War, the Herald replaced the Republica as the flagship of the allied armada assembled against the Neraida Gigamatrix, serving at the front-lines of the conflict and a beacon of hope and resolve to the beleaguered Allied forces.

Commissioned in 06 BNE to serve as the flagship of Voro Acetenus, the Herald of Retribution served as the infamous fleetlord's vessel during a multitude of campaigns throughout the Intergalactic War, most notably during the Eire Campaign during the opening months of the war, during which the Herald of Retribution annihilated the planet's surface via orbital bombardment. Throughout the remainder of the conflict, the Herald was also used by Acetenus during the destruction of nine Republic worlds prior to the war's mysterious end in the skies above Capricaerón.

Though the Herald remained Acetenus' personal command ship during his time as leader of the Cognatus Remnant, it was rarely seen during the Remnant's existence, instead being assigned to deep space exploration missions aiming to reform the remainder of Cognatus assets. During these missions, the vessel was commanded by Shiplord X'elorn Tolahven while Acetenus more often used the Herald's sister ship Placidi Itinere, which was ultimately destroyed by the Basileus during the Dark Times.

The ship once again appeared after the formation of the Unified Order of Cognalorilos, where it was soon reclaimed as the personal flagship of the Primarch. The ship saw battle for the first time in several years during the Cataclysm in the Neutral Zone, where it was used to great effect against the demonic forces of the Corruptus Overworld Brezank. After the battle, the ship returned to Cognethril, where it received a month-long refit bringing it up to standards with other modern Cognatus vessels. Much to Shiplord X'elorn Tolahven's frustration, this refit prevented the mighty flagship from partaking in the Battle of Cognalorilos.

“Unleash the wrath of our cannons, shiplord! Let these abominations taste plasma!”

During the Neraida War, Voro—as warrior king in his position as Primarch—directly commanded the Cognatus battlefleets from the bridge of the Herald of Retribution. As one of the key flagships of the Allied armada assembled to finally destroy the Neraida Gigamatrix, the Herald saw extensive action beginning with the pivotal Defense of Angrenos. The first ship to attack the Supercube during the battle, the crew of the Herald would be praised as heroes throughout Republic space for their tireless devotion to defending their allies from the Neraida. During the subsequent battle of Coruanthor, the Herald unleashed torrents of plasma upon the Supercube, ultimately contributing to its final destruction in the skies above the ruined ecumenopolis.

The Herald subsequently became the unofficial flagship of the Allied armada when the Republica was damaged during a confrontation with a Neraida dreadnought. Commanded directly by the Primarch, the Primarch was the tip of the spear which ultimately pierced the heart of the Gigamatrix, smashing their fleets at the Battle of the Neraida Core and freeing Cyrandia from their nefarious whims.

Though a member of an older class of warship now rarely seen in the fleets of the Cognatus Empire or the Cognatus Order, the Herald of Retribution has been fully retrofitted into one of the most formidable warships in the Cyrannus Galaxy, on a par with other Cognatus warships such as the Harbinger of Truth and the Resolution and Truth. An assault carrier of old, vessels of the Herald's class were only ever afforded to the Cogsangui Shiplords considered by the military hierarchy to be extremely capable commanders. After the ship's significant overhaul in 05 NE, the vessel was afforded exemplary non-phasic shielding as well as a multitude of energy projectors and deconfinement disruptor capable of slicing through enemy capital ships. Even prior to the update, the Herald was equipped with stronger armament and defences than other ships of its class owing to the modular design of Cognatus assault carriers.

X'elorn Tolahven is a male Cogsangui who serves as one of Voro Acetenus's key attaches ever since his days as a fleetlord during the Intergalactic War. Though the Primarch is officially the commander of the Herald, his duties as leader of the Order often necessitate Tolahven's ascension to shiplord, a title he wears with pride and diligence. A vigilant, independent and highly resourceful individual, Tolahven is greatly respected by many of his peers in the Cruentus Battlefleet, especially for his ability to anticipate situations and problems and plan accordingly, a trait which has led to the victory of the Herald in its many engagements throughout the years.

Like a growing number of his kin in the Order, Tolahven is also skilled with diplomacy despite his lack of interest in ceremony or tradition. Nevertheless, his skills as a diplomat are such that in addition to his role as shiplord of the Herald, Tolahven was selected by the Primarch to serve as the Order's lead emissary to the New Cyrannian Republic during joint operations, particularly those relating to the Mou'Cyran Accords. In addition, X'elern is an adept swordsman and warrior with experience in many of the campaigns fought by the Cogsangui since his birth, though he has often stated that he feels no pleasure from ending another's life, even if it is someone he disliked.

“A relic. A weak symbol of our dishonourable past. May it crackle, burn and be abolished by our new-found might.”

“I admit, the sight of vessels such as this remind me of darker days.” 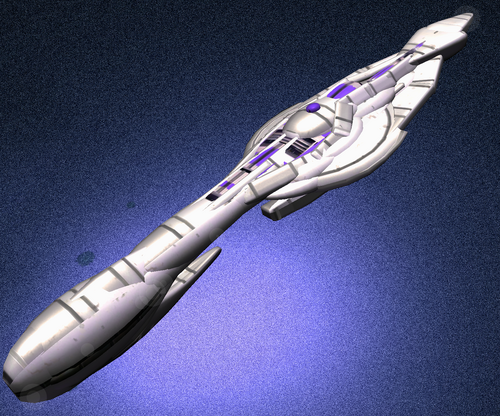 Retrieved from "https://spore.fandom.com/wiki/Vehicle:Herald_of_Retribution?oldid=740704"
Community content is available under CC-BY-SA unless otherwise noted.