“Our foremost tools of discipline to the disparate rebels of the Outer Rim.”

The Harrower-class Star Destroyer is a type of Star Destroyer utilised by the Imperial Navy of the Galactic Empire of Cyrannus. Ostensibly introduced to replace the ageing Star Frigate design of the same name, in reality the Harrower-class was put into production to strike fear into the hearts of the Vasuband Rebellion and to prove that not all Basileus had rebelled against the Emperor. The primary individual behind the creation of this fearsome destroyer was Lord Venatorius, who merged Basileus and ancient Phaedric ship designs to create a Star Destroyer destined to become, along with the Imperator and Venator-class, one of the foremost symbols of the Empire's naval supremacy.

Put into active service in the opening months of 05 NE, the first Harrower-class was christened the Dominator and placed under the command of Commodore Marrgrev, who began his ship's maiden voyage by targeting the closest rebellious planet sympathetic to Vasuband and annihilating the largest population cemtre with a displacement cannon volley, forcing the rest of the system to capitulate; a stark warning against those who would dare defy the Emperor's inviolable will.

Prior to the introduction of the Harrower-class Star Destroyer in the opening months of 05 NE, similar designs had seen service since the early days of the ancient Phaedric Empire, which in turn inspired Basileus warships during the closing months of the Great Cyrannus War. These battlecruisers would be merged with Republic Star Destroyers to provide the bedrock of the earliest Imperial fleets, including the Harrower-class Star Frigate, the smaller and less powerful forerunner to the Harrower-class Star Destroyer. The first HSD was the Dominator under the command of Commodore Marrgrev, who destroyed the rebel world Sneorus with a displacement cannon volley, earning the ship and its class a fearsome reputation amongst the rebels of the Cyrannian Imperial State.

Throughout the New Cyrandia Wars, the Harrower-class would see engagement in various conflicts such as the Battle of Antemurale and the Cataclysm in the Neutral Zone. When the New Cyrandia Wars ended, Harrowers continued to be used during the Reconquest of the Rim campaign against lingering remnants of the Imperial State. By the time the Cyrannian Cold War broke out, the numbers of Harrower-class Star Destroyers would surpass Imperial Venator-class Star Destroyers, becoming the Empire's second most common ship-of-the-line.

During the closing stages of the Cyrannian Cold War, a vast flotilla of Harrower-class Star Destroyers were deployed along the Neutral Zone with the New Cyrannian Republic by Grand Admiral Tector Decimius. Dozens of the destroyers were fitted with a devastatingly powerful superweapon known as Ecimaex, mounted between the Harrowers twin wedged-prongs. Capable of sniping enemy vessels utilising charged tachyonic matter as they moved through hyperspace, the Ecimaex weapons mounted on the Harrowers were designed to be capable of destroying Republic dreadnoughts in a single shot, affording the Empire with a distinct tactical advantage should war come with the New Republic.

Like most Imperial starship designs, the Harrower-class utilises a wedge-shaped design, the "point" of which being split down the middle, creating two prongs which housed two of the Harrower-class's five hangar bays, the others being located behind the short "wings" of the ship which protruded from the side while another was located on the underbelly, much like the slightly larger Imperator-class Star Destroyer. In order to defend the mighty warship, the Harrower-class is equipped with an Imperial variant of non-phasic shields below which is a heavily reinforced hull plating should the mighty shields of the vessel fail. Like most other modern Imperial ships, the Harrower-class utilises a coronadrive for near-instantaneous faster than light travel across galactic distances.

While equipped with turbolasers expected from similarly sized warships, the Harrower-class makes good use of the latest updates to the Imperator-class in 04 NE, including devastating continent crushing displacement and matter cannons, hyperspatial torpedoes and a single hyperlaser located between the two prongs of the ship, developed using technology devised by Majestic during the Second War of Black Fog.

“I am most impressed with the success this design has yielded.”

“It would be so very satisfying to watch one crackle and burn under the power of my cannons.”

“Looks like it is time for a blood bath.” 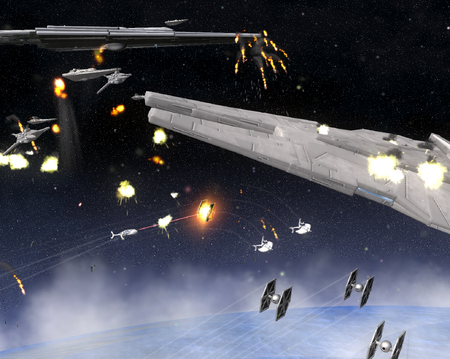 A crippled Harrower during the Battle of Imperavelli. 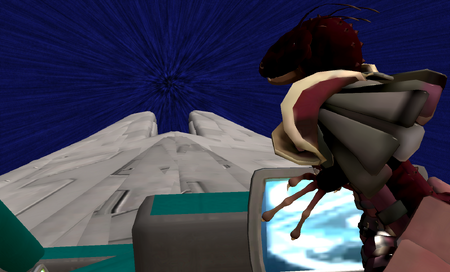