Right Behind You Story, 06 AQF

The Falcon is a small cargo freighter used by Claire Rambo & Friends during the Right Behind You storyline. During it's travels, the Falcon visited exotic places like Aecor, Yudumarth, Orbispira, Sanderhal and Vasuband amongst others. After the events on Arcaniox command of the ship was handed over to Corva after the crystallization of Claire Rambo.

By 21 AQF, the Faclon was destroyed in orbit of Tar Kuuraen after Stench rammed the Falcon into the Arquitens-class Provocateur of captain Tessala.

Rambo Command gave Claire Rambo the Falcon when she was still at Aecor, the Atlantica planet discovered during the Hunt for the Zevian Skull. Claire, eager to go on new missions was delighted to be given a small ship for herself, especially with the adjustments made by Rambo Command and her following new role as Rambo Operative.

Launched in 10th month of 06 AQF, it travelled with Claire, S'aur, Stench and Tatsu Irana for a covert operation at Yudumarth. Afterwards the Falcon travelled to the Cyrannus Galaxy where it went to Orbispira, on the return home they brought Corva and Voro Acetenus, as well as Tironus Manition. During it's way back to the Quadrant Galaxies, it was inspected by Gaius Prentus and the ICS Accuser.

During it's trip to Sanderhal, the ship was damaged by lightning and was forced to execute a hard landing after wich it's engines needed repairs. After the repairs, the Falcon set course to Terra Prime where it remained for a while before leaving the planet for a mission at behalf of Rambo Command at the Rambo colony known as Koerband. At Koerband it was allowed to fly over the ruined city of Ramloria City, where it narrowly managed to escape destruction by a Viral horde due to the skillful piloting of Voro and Stench. After being escorted by Cascabels to Cardolast, it was forced to land and remained grounded until it could leave later on once more.

During the outbreak of the Tertius Bellum in 08 AQF, the Falcon visited Vasuband in the Cyrannus Galaxy during the siege of Vasuband. Escaping the ordeal, the vessel was one its way back towards the Quadrant Galaxies when Tironus Manition noticed an old Rambo transmission hailing from Riphar-15JD, it turned out to be a prison planet held by the Regellis Star Empire, during some adventures resulting in the resque of Ramikku Ramoval it was taken under siege by Regellis war birds until it was put out of harms way with the arrival of the Praesator-class star destroyer, the Endeavor under command of admiral Vinchauk Il'Chahol.

Afterwards it travelled to Nal Amroth where the crew had dealings with the notorious Syndicate before it feld to the safety of Terra Prime to meet with professor Kjac. In July of 08 AQF, the ship travelled to Arcaniox during the unfolding events known later as the Torments. After Claire fell in battle with the evil entity Tormentor command of the ship passed down to both Corva and Tironus Manition

With Claire Rambo fallen in battle and frozen, Corva and Tironus Manition assumed command of the freighter until 21 AQF, the Faclon was destroyed in orbit of Tar Kuuraen after Stench rammed the Falcon into the Arquitens-class Provocateur of captain Tessala.

FThe Falcon is a small cargo freighter, humble and quite agile these cargo freighters were designed at Sanderhal and later on sold to all those who wished to buy it. The freighter is equipped with limited shielding and blaster, though can reach speeds of over Warp 6. With a brige, various accomodations and a cargo bay these ships became a prefferable ship for traders, smugglers and criminals as they are said to be able to outrun a Constitution-class.

Claire was given a confiscated freighter by Rambo Command, as well as a modified and upgraded systems like shielding, various photon torpedoes, a transporter and a replicator. The crew deceided to call the ship the Falcon. Additional equipment in the cargo bay was a buggy terrain vehicle and a Chinwakya speeder.

Bridge of the Falcon

Cargo bay of the Falcon

Living room, with kitchen, tv and a computer

Bathroom with two toilets, one shower, was and dry machine and a laveratory 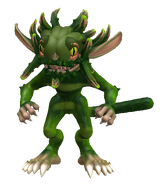 Png file of the Falcon with interiors