The Executor-class Star Dreadnought is a 31,200 metre long warship utilised by the Galactic Empire of Cyrannus, designed to be so powerful that the mere threat of its retribution would pacify rebellious sectors of space. Commissioned by the two-week old Empire in the wake of the Great Cyrannus War, the Executor-class was the first Star Dreadnought class to be unveiled as part of the top-secret Nemesis Project pursued on a myriad of worlds including Orbispira, Antemurale and Cyroenia. When the prototype, the Executor, finally left drydock over Cyroenia a year later, nothing in the galaxy could hope to survive an encounter with it.

The Executor was placed under the command of Zillum, who christened the mighty vessel by ruthlessly annihilating the Hutter world of Tigma, killing billions of civilians and utilising the Executor's turbolaser projectors to carve the Imperial insignia into the planet's obliterated crust. Later placed under the command of Grand Admiral Palenix, the Executor continues to serve as a beacon of Imperial strength throughout the galaxy. Despite the fearsome reputation of the class, the loss of the Illustrious during the First Battle of Abrion, overwhelmed by an Imperial State fleet during the New Cyrandia Wars proved that the Executor-class was not invincible.

While overshadowed by the gargantuan Nemesis-class Star Dreadnought, the Executor-class are far more common within Imperial space, with up to thirty of the dreadnoughts believed to have been built since the introduction of the class during the Dark Times. Indeed, New Republic strategists are constantly vying for information about potential design flaws, knowledgeable that nothing in the Republic Navy could match it.

The brainchild of Mandator Tira Mizio, the Executor-class Star Dreadnought was developed under the top-secret Nemesis Project—named for the subsequent Nemesis-class—in tandem with scientists and strategists on Orbispira, Antemurale, as well as her native Cyroenia. Unveiled in 02 NE, the first vessel of the class was the Executor, placed under the command of Zillum, who commanded the flagship until his defection to the Cyrannian Imperial State. While considered to be an invincible extension of the Emperor's inviolable will, the Empire would suffer a considerable embarrassment during the First Battle of Abrion during the New Cyrandia Wars, when the Illustrious was destroyed under intense bombardment by an Imperial State fleet under the command of Admiral Chathanglas—the first Executor-class to be destroyed. However, the service of the Tyrannic under Grand Admiral Sarcophoneus and the continued service of the Executor under Grand Admiral Palenix, did much to advance the image of the Star Dreadnought in the hearts and minds of the Empire's citizenry.

Measuring 31,200 metres in length, the Executor-class was first dismissed by naval traditionalists within the Imperial Navy as a needless waste of resources which could have been better utilised in the construction of a flotilla of Star Destroyers. However, their reputation quickly grew with each passing year, for while the class was inarguably difficult to maintain, they proved to be nigh-invincible in combat. Indeed, the Executor-class are equipped with displacement cannons, light matter cannons, rapid-fire superlasers, a space-time metric weapon system, heavy dual turbolaser cannons, point-defense dual laser cannons, heavy proton, vortex and hyperspatial torpedo tubes, as well as a myriad of other weapon systems all but classified by the highest levels of the Imperial military.

“The embodiment of the Empire's strength and power. Soon, the Tyrannic will darken the skies over Mou'Cyran and show the Republic who truly rules this galaxy.” 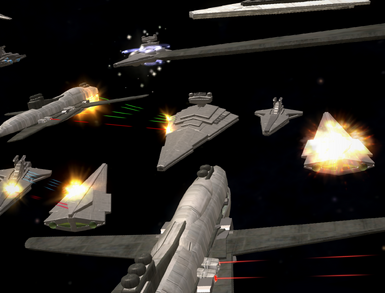 The First Battle of Abrion—during which the Illustrious was destroyed.
Add a photo to this gallery

Retrieved from "https://spore.fandom.com/wiki/Vehicle:Executor-class_Star_Dreadnought?oldid=728392"
Community content is available under CC-BY-SA unless otherwise noted.