Capital of the Andromedan Galactic Commonwealth

Guardian-Commander Telya Sensha
The Elysion Realm is a sprawling pair of ringworlds within Segmentum Draco of the Andromeda Galaxy. Established in the late 28th century via joint cooperation between various Andromedan powers, it acts as the site of the headquarters of the Andromedan Galactic Commonwealth and thus operates as the symbolic and political heart of the galaxy.

As well as housing the offices of the Andromedan Light, Elysion's rings are littered with embassies and hotels, with many visitors being either tourists or visiting dignitaries who have come to mix in a zone declared to be shared between all Andromedan civilisations and cultures.

The first plans for Elysion were drawn up in the final year of the Andromeda War by a collaboration of engineers and architects within the Alcanti Royal Academy. Due to the war, presentation was deferred until a summit several months after the war's conclusion. The plans - the schematics for Elysion-A and the artificial star - were widely received. The summit agreed to locate the station within neutral territory as a gesture that Elysion was neutral ground for all.

Elysion-A was completed in 2789 and opened up to the first embassies. It proved highly popular within its first years, and as word of mouth and media coverage spread, more and more sought to visit it, in some cases entire cities were planned to accommodate the influx of prospective residents. It was also within this year that a new and more expansive Seat of Light than the one on Alcanti was built yo accommodate the number of possible members the Andromedan Galactic Commonwealth co

By 2794 plans were drawn up for a second ring and appropriate illumination arrays from the artificial star. Dubbed in planning as "Elysion-B" he new ring was drawn up twice as large as Elysion-A and was perpendicular to the original structures. The population of both rings (with B completed in 2796) swelled further. Since its construction the complex played host to several more clandestine operations such as the containment of The Artifacts as well as being the location of several controversial political discussions such as the Deep Core Blitzkrieg in 2791.

Elysion consists of two solid rings that orbit around an artificially-constructed star. Officially designated Elysion-A and Elysion-B and more colloquially known as Elysion Minor and Elysion Major respectively. These rings form the bulk of residences, industry and commerce on board the station while further expansions include satellites orbiting beyond Elysion-B.

Both rings, aside from the differences in diameter and width, are functionally identical to each other. The two 840km-wide rings are layered with a moulded mock geographical landscape of a combined area of over 300 million square kilometres. These surface areas are edged with 6km high walls and covered at the top with a utility fog mesh in order to retain the atmosphere. The terrain consists of a range of mimicked landscapes from planets located throughout the galaxy in order to accommodate for the various populations the station caters for. Underneath the surface - a rock layer of 300 metres - is a 2km deep level that serves as a secondary population sector similar to the hive regions of Minos'Drakon and metropolitan Araveene interspersed with parklands roofed with sky projectors. The outer levels serve as housing for factories, replicators, large-scale storage areas as well as several sites reserved by the Andromedan Galactic Commonwealth for clandestine operations, article containment and classified research facilities.

Located in the plains of Sandoraf, Elysion's Seat of Light acts as the centre of politics for the galaxy and is the gathering site for the Andromedan Light. Designed to be largely similar to the Seat of Light located on Alcanti, the Elysion seat is roughly 80% larger while retaining the layout of a three-point star. Another key feature is the the multiple auditoria that were designed by architects from The Divinarium whilo combined with aspects of Draconid and Artharon visual aesthetic in order to both impress visitors and maximise the projection of the voices of all attendees.The roof exhibits a new feature not seen in the old design - a domed pavilion that serves as a private meeting hall for the Highlords of Andromeda and any personally invited audiences.

Elysion's location and prestige as one of the greatest melting pots in Andromeda make it an extremely popular location for politicians and the galaxy's wealthy elite. Many of the galaxy's wealthiest own sprawling estates in the more rural regions of the structure, often with customised vista landscapes approved by the Elysion Landscape Board. An image has quickly developed portraying the typical Elysion resident as an affluent member of high-society who displays a borderline-obsessive interest in foreign culture and cuisine while dining and socialising many international contacts.

Elysion Minor's importance as the site of the Seat of Light make it a popular location for embassies owned by nations throughout the First Gigaquadrant. This popularity has in the years since the station's construction has encouraged the development of a prosperous entertainment sector including theatres, lounge clubs, restaurants and spas to cater to the elite of the intergalactic community.

The importance of Elysion to the AGC makes it a primary patrol zone for the Guardians of Light, who have been installed as the station's police force and primary defence force. Orbital defence is also shared between several of the Andromedan Commonwealth's member nations. 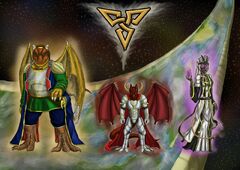 Artist's depiction of the Andromedan Highlords and one of Elysion's rings

“The landscapes are nice but the people can be too pretentious for my comforts.”

“There are few places in the galaxy more beautiful than the fields, oceans and mountains crafted by the Commonwealth's finest landscapers and set within this one sublime location.”

“In many aspects, this station is simmilar to Matrukoris, especially in the aspects of landscape and usuage. However, where Matrukoris was build by the great Multus Esse in a near-forgotten past, Elysion is build by the modern members of the Commonwealth. That can be considered a formidable undertaking indeed, and I applaud them for it.”