The Dreadnought-class was introduced at orders of Rambo Command.

During the Great Cyrannus War in 04 AQF, Rambo Nation managed to capture a Mortalitas dreadnought, once brought into service by the Imperial Alliance during the Second Galactic War in 0 BQF. The captured Burning Heretic was brougth to the classified location known as Lesrekta, a planet located in the mid-colonial sector. There scientists studied the design, improved and adjusted it to Rambo liking and introduced it to Rambo Command. Command wanted a more powerful ship, as Rambo ships were often smaller yet far agile, the Rambo missed a war ship in their fleet and a fighter carrier. As such the Dreadnought-class came into construction at the Shipyards of Rowar, with a omnirole as command ship, starfighter carrier, attack cruiser and troop transport, Rambo Nation had a perfect ship to combat the Confederacy of Allied Systems with more heavy fire power, backed up by the smaller yet faster and agile Rambo ships.

However, the Dreadnought-class first saw action when the United Republic of Cyrannus was reformed into the Galactic Empire of Cyrannus who marked the Rambo as traitors. During the initial months of the Dark Times, the class was used against the Imperial Venator-class Star Destroyer and Imperator-class Star Destroyer. Managing to hold her equal against the former, the latter proved to be able to overpower the Dreadnought-class and eventually the Cyrannus Colonial Sector was lost. A large fleet of Dreadnought-classes were stationed at the Rambo Capital, but were unable to prevent the Empire victory that resulted in a "protectrate" status of Rambo Nation.

The Dreadnought-class remained in service during the remaining of the Dark Times and the Quadrantia Disorder and beyond, with the RNSF Mirage Cascabel as it's fighters. The class was eventually discharged somewhere between 15 AQF and 20 AQF under pressure by the Galactic Empire of Cyrannus. Rambo Command complied though some of them wound up in the hands of civilian hands and the Rambo Loyalist. Those that did were heavily modified and upgraded.

The Dreadnought-class ships were massive, cylindrical 2,177-meter-long warships with a pointed nose that tapered towards the superstructue. These ships are said to be some of the biggest in the entire Rambo Navy in the history of Rambo Nation. Capable fo holding a planetary blockade almost by themselves, the vessels are a true menace. Rising from the stern portion of the vessel, was an elongated main communications and sensor pod. The ships are said to be capable of landing on water in case of emergencies.

It's armement are said to be impressive for Rambo standers, equipped with thermal and rotating ships it has a very powerful defense. It's offensive systems were even more impressive: 4 heavy ion cannons, 8 photon and quantem torpedo batteries with an arsenal of 2800 torpedoes, 2 forward phaser cannons and 16 phaser banks.

It could transport over 48.000 clone troopers into battle, able to hold over 80 fighter crafts and dropships.

The class is equipped with a hperdrive as well and impulse power, though lacks warp drive.

There differant kind of versions of the Dreadnought-class in service, both within Rambo Nation and within the Navy of the Quadrantia Loron as they managed to get their hands on a large number of them after the Second Galactic War. 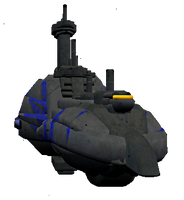