The Calidusa is a heavily armed Subjugator II-class Dreadnought in service to the Confederacy of Free Planets. Designed and constructed over a twelve year period in the distant Namdorei Strait, the Calidusa was specifically designed to counter Imperial naval supremacy in Cyrannus, armed with two ion hypercannons capable of rupturing the shields of advanced Imperial battleships.

Commanded by High Admiral Evel Thielde, the Calidusa was named after one of the Old Confederacy's earliest political figures, and represented the culmination of Project Calidusa, which aimed to counter what was perceived to be an inevitable Imperial invasion of Confederate Space after the New Cyrandia Wars. The mighty dreadnought, the sole vessel of its class, was ultimately completed in the midst of this invasion—the Iunius Offensive of the Second Great Cyrannus War. While its launch was too late to prevent the fall of multiple Confederate worlds along the Rimward Curve, the Calidusa's power was such that even the arrogant Imperial High Command was forced to rethink its strategy.

After the signing of the peace accord between the Galactic Empire of Cyrannus and the Confederacy of Free Planets on the Republic Star Destroyer Sword of Peace in 5 NE, Chancellor Taros Cassynder set out to establish the Confederacy as a sovereign union of planets capable of defending itself against what he perceived to be an inevitable Imperial invasion. The pinnacle of these efforts was Project Calidusa, headed by Admiral Evel Thielde, the intention of which was to ensure that the Confederacy had the ability to firstly defend itself, and in the best case scenario, eventually claim the galaxy.

While Cassynder himself rejected military conquest of the Empire as a pipe dream doomed to end in failure, he nonetheless funnelled vast resources into the creation of a Dreadnought capable of destroying Imperial vessels, even those several times larger. When the Second Great Cyrannus War began over ten years after the inauguration of Project Calidusa, Cassynder, surprised that the Empire hadn't launched a simultaneous assault on Confederate Space, urged Admiral Thielde to accelerate the construction of the Calidusa, which, due to the secrecy involved, was lagging in the final construction phases for the several months.

Two years later, when the New Republic fell during the conquest of the Twelve Worlds, the Calidusa was merely weeks away from a planned field test, and was still in drydock in the Strait of Namdorei when the Empire crossed the Void of Arathamaii in the opening attack of the Iunius Offensive against Confederate Space. When the Imperial flagship Sovereign utilised Oikoumene technology to cut off communication between the core systems of Confederate space and the patchwork of fleets operating in the outer fringes, including the Calidusa, Thielde took matters into her own hands, launching the Calidusa and ambushing an Imperial fleet in the Strait, utterly annihilating three Imperator-class Star Destroyers and beginning a new counteroffensive to repel the Imperial invasion.

“In the Empire's arrogance, they rushed into our space expecting an easy victory. In truth, they've sealed their own doom.” 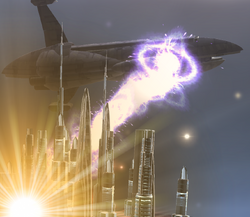 The Malevolent, a Great War-era Subjugator I-class Dreadnought, commanded by Zillum and the inspiration behind the Calidusa.

Retrieved from "https://spore.fandom.com/wiki/Vehicle:Calidusa?oldid=790216"
Community content is available under CC-BY-SA unless otherwise noted.