The C.R.S. Valour is a Phoebus-class Star Destroyer under the command of Commodore Thonaloc serving in the Starfleet of the New Cyrannian Republic. Introduced in 03 NE at the Shipyards of Coruaan, the Valour was the 120th Phoebus-class put into service.

Measuring 1,950 metres long, the Valour is one of the most powerful ships in the Cyrannus Galaxy, being able to go toe-to-toe with an Imperator-class Star Destroyer. The Valour functions primarily as a command ship rather than a carrier, though it does carry a small wing of X-9 Advanced Reconnaissance Starfighters. 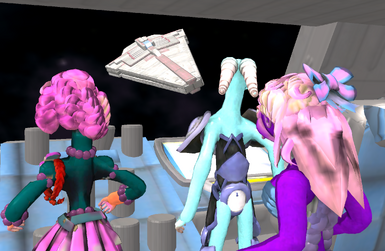 The Valour prior to its refit