The C.R.S. Allecto (VSD-13) is a Venator-class Star Destroyer commanded by Captain Nerazachi, in active service since 04 BNE, making it amongst the first of its class to be commissioned at the shipyards of Cyroenia. The massive Star Destroyer was unveiled just in time for the outbreak of the Great Cyrannus War, where it often saw action in some of the largest conflicts in the Quadrant Galaxies. During the opening stages of the conflict, the Allecto was assigned to the borders of the U.R.C. for patrol missions before being recalled to the Rambo colony Javan, where it joined a joint-Cyrandia fleet under Captain Ramniels Ramcelsior of the U.S.S. Majestic.

During the Fourth Battle of Yudumarth, the Allecto fought tooth and nail with the Mortalitas Dreadnought Terror of Stars under the command of Captain Nirndal, though it was heavily damaged by a flanking attack by two Confederate Frigates. Though crippled, coverfire from the USS Majestic allowed the Allecto to escape to fight another day. After being repaired at a stardock over Javan, the Allecto was transferred to the taskfroce led by Ramcard, which included Thel'Vicliquam, where it fought in the Battle of Muunivelle. Though moderately damaged in the conflict, the ship survived to the end of the war.

After the rise of the Empire, the Allecto and its crew remained loyal to the Republic in Exile and later the New Cyrannian Republic. Serving throughout the New Cyrandia Wars and into the dark times of the Second Great Cyrannus War, the crew of the Allecto remained loyal to President Apollo after the Fall of the Twelve Worlds, becoming a key asset to the burgeoning New Republic Remnant.

Launched in 04 BNE, the Republic Star Destroyer Allecto was the fourteenth vessel of its class to be unveiled at the famed shipyards of Cyroenia, and a member of the first batch to be sold to the Navy of the United Republic of Cyrannus. Almost a year after being launched, the Allecto was placed under the command of the young Trucinex captain Nerazachi, who was assigned to defend the Republic's newly established colonies in the Quadrant Galaxies. Under Nerazachi's command, the Allecto proved instrumental in several of the most important battles of the Quadrantian front of the Great Cyrannus War, including the Third and Fourth Battles of Yudumarth.

With the rise of the Galactic Empire of Cyrannus, the crew of the Allecto remained loyal to the ideals of democracy by pledging their loyalty to the so-called Republic in Exile, where Nerazachi found himself under the command of Admiral Laege Shavalera. When the Republic-in-Exile joined the New Cyrannian Republic in 03 NE, the Allecto was rechristened with the C.R.S. registry, and refitted to serve in the newly formed Republic Starfleet. During the subsequent New Cyrandia Wars, the Allecto was dispatched to the distant Borealis Galaxy on a top-secret joint mission between Republic Strategic Intelligence and the Polar Crystal Alliance to destabilise the Empire's hold on the Heleanorian people.

After the end of the conflict, and in the midst of the Cyrannian Cold War, the Allecto was briefly assigned to Fleet Admiral Aver Kuestantine's fleet, and battled the Loron invasion at the Battle of Bragolben Field. The Allecto was damaged during the battle, and was forced to retreat to the nearest Republic starbase for repairs.

During the Second Great Cyrannus War almost a decade later, the Allecto was assigned to Fleet Admiral Willelmus Cretacea's Grand Republic Fleet, though was occasionally deployed independently from Cretacea's task force, such as during the Battle of Achiliquin, when it proved instrumental in the destruction of the Dark Hand—the flagship of the dreaded Phaedric Lord Maethoruin. Several weeks later, having joined Cretacea's fleet, the Allecto fought to defend the Twelve Worlds against an unexpected Imperial invasion which resulted in the fall of Capricaerón and the subsequent collapse of the New Republic.

Refusing to give up the fight against the Empire, Nerazachi rallied his crew and joined Cretacea and Apollo in the formation of the New Republic Remnant, with the Allecto being but one of fourteen vessels which refused to surrender. Fleeing to the Cognalorilos system, Allecto later saw battle against the Great Star Dominion, and remained loyal to the Remnant despite the mass defection which occurred after the death of Admiral Cretacea and the destruction of the flagship Republica.

“Man, I hate spaceship fighting. If I could go up to that guy and smash his face, it'd be so much simpler.”

- Xevern, while on the bridge of the Allecto during the New Cyrandia Wars 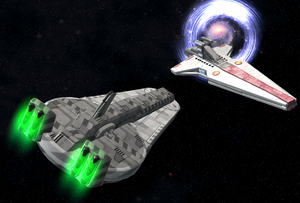 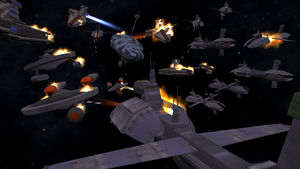 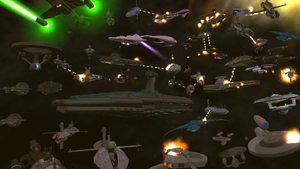