“The finest posting in the fleet bar none if you ask me.”

The CRS Aeolus is a Venator-class Star Destroyer under the command of Captain Helo Roslia that serves in the Starfleet of the New Cyrannian Republic. The Aeolus was the last Venator-class put into production in an alternate 245 NE under the flag of the restored Cyrandia Alliance though the ship was retired by the time the Xeranbha invaded over a millennia later. During the course of Helo Roslia's adventure in the future, his previous flagship was destroyed and the time travelling captain and his crew were soon given command of the Aeolus and eventually used it to return to the present.

Soon after its arrival, the Aeolus began a retrofit to function as the key exploration cruiser of the newly formed Cyrannian Republic under the command of Roslia and his crew. The Aeolus soon came to the forefront of the mysterious happenings emanating from Mou'Cyran, earning the vessel a reputation that it is the best posting in the entire fleet for those seeking adventure and intrigue.

The CRS Aeolus was launched in an alternate future in which the New Cyrannian Republic and Rambo Nation merged to form the Cyrandian Republic. The Aeolus was seen as a powerful, though outdated warship by the time of the Second Great Cyrannus War in this timeline, though it remained intact for many years, even after the devastating invasion of the Xeranbha in the 12th Century NE. After the destruction of the Avenger by the Xeranbha during Helo Roslia's adventure in the future, Aquillius Cretacea managed to convince President Le Rambo to allow Roslia to use the Aeolus to travel home to the present. Upon arriving in the present, the crew of the Aeolus had a celebration on the USS Enterprise of Rambo Nation before returning to Republic space.

To the crew's delight, the Republic in Exile had been absorbed into the New Cyrannian Republic by the time the Aeolus arrived in the current timeline. With few ships in active service, the Aeolus became one of the first vessels to fly the flag of the Republic Republic Starfleet and was ultimately tasked with finding a new homeworld for the Republic. Ultimately, Captain Roslia used astronavigational information to arrive at a planet he would dub Mou'Cyran, a world he had visited in the future timeline.

However, unbeknownst to the crew of the Aeolus, the Regellis Star Empire at their eyes on the planet and launched an attack which they soon retreated from, seemingly unaware that the Republic had such a military presence around the planet. Nevertheless, the Aeolus was placed on high alert, with its first mission being the patrol of Mou'Cyran and its nearby sectors. The crew of the Aeolus was soon face much sorrow when the First Officer, Commander Trebob was killed while exploring an Icolian Assemblage base on Mou'Cyran. In response, Roslia appointed Commander Sevine as his new first officer. Meanwhile, a pilot school was set up in the main hangar bay, which welcomed a fresh wave of recruits from all across the Republic.

The Cold War and the Confrontation with the Neraida[]

Under the command of Captain Roslia, the Aeolus became a coveted posting in the fleet, responsible for first contact with over thirty new species in the Unknown Regions since the end of the New Cyrandia Wars. When the Neraida Gigamatrix attacked the Republic in what became known as the Neraida War, the Aeolus was assigned to a battlefleet under the command of Fleet Admiral Aver Kuestantine. Roslia quickly made a name for himself as someone capable of disobeying direct orders from the Fleet Admiral and Command, though on at least one occasion—namely the discovery of the Neraida wormhole network—it paid off. The Aeolus would fight in the disastrous Massacre of the Concordian Nebula, before being assigned to the fleet under Fleet Admiral Willelmus Cretacea, where it participated in the Defence of Angrennos, the largest Allied victory of the conflict thus far. 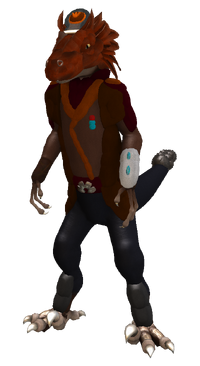 “It's my privilege to captain the Aeolus. I will not let my crew down.”

Helo Roslia is a very capable and experienced officer; he is wise beyond his years and has experienced a great deal since the beginning of his military career. Probably the strangest thing about him is an apparition of a young woman that has been appearing to him since the end of the Intergalactic War. This apparition refers to herself only as Sonja and appears as an attractive Libertus. She is often very forceful in her beliefs of a One God and claims to be a messenger of it.

When the Galactic Empire of Cyrannus was formed, Helo refused to join it, instead becoming one of the Exiled Republic's military leaders, with his messenger constantly by his side. During his tenure as a captain in the Exiled Republic, both Helo and his ship were transported to one thousand two hundred and fifty years into the future, where he aided both the future Empire and the future Cyrandia Alliance against the mysterious Xeranbha, who had conquered much of the universe by that point in history. Though his trusty flagship, the Avenger was destroyed, he soon returned to the present with the CRS Aeolus, and pledged his allegiance to the New Cyrannian Republic. 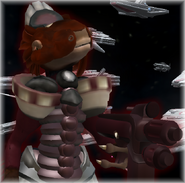 “I take my duties as first officer very seriously. Still, the thrills of science are always calling me back for more.”

Commander Sevine is a female Ortella who serves as the science officer aboard the Aeolus. Sevine is highly intelligent and she knows it, much to the annoyance of some other shipmates who see her as being a pompous little girl who is too smart for her own good. As a crewmember of Helo Roslia's Avenger, Sevine became trapped in a future alternate timeline. Sevine was very interested in studying this future timeline before returning to her home on the CRS Aeolus, the vessel on which she currently serves. When her friend Commander Trebob was killed by Icolians, Sevine mourned for his loss but was ultimately promoted to his rank of first officer. 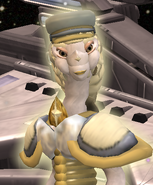 Epol Salan is the chief engineer of the Aeolus, holding the rank of Subcommander. An Alavar, Salan grew up in the underworld of the capital planet of Orbispira, making a living by repairing old speeders, earning a reputation as a highly skilled mechanic. When the Great Cyrannus War began, Salan felt a patriotic duty to the Republic by joining the Navy, using his technical expertise to repair starships damaged in battle. Ultimately, Salan refused to join the Empire when it was formed, and instead transferred his services to the New Republic, eventually being posted as the chief engineer of the Aeolus, a job he treats with the utmost respect. 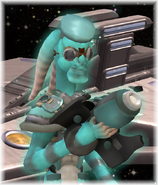 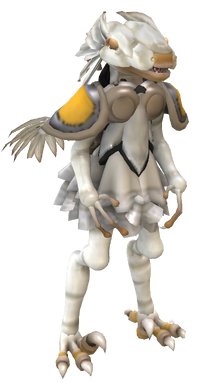 Doctor Jena Faustus is a female Libertus that serves as the chief medical officer of the Aeolus, having served with Helo Roslia since the Intergalactic War. Faustus is seen by the crew as a doting mother-like figure who takes her job to protect the crew of the Aeolus above her own well being. Due to her civilian status, she also sees herself as above the chain of command and is willing to constantly berate crew members who don't show up for their monthly physical. However, Faustus is almost universally loved by the crew of the Aeolus for her friendly and good-humoured nature. 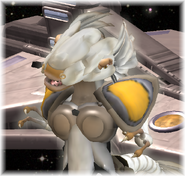 “I encourage all members of the crew to talk to me about their feelings.”

Counselor Lysara is a female Lacertian that serves as the counselor of the Aeolus, functioning as an officer willing to listen to the various problems that the crewmembers may be facing as well as being responsible for their emotional wellbeing. As a female Lacertian, Lysara is a being of peace and tranquility and though she often finds the crew of the Aeolus to be overly boisterous and loud, she is nonetheless very fond of them. Though she is a Sublieutenant within the fleet, she is one of the few members of the crew who do not wear a uniform, instead adorning a pleasant, traditional Lacertian outfit.

Subcommander T'Ran is a female Tezelteän that serves as the navigation officer of the Aeolus, having previously served in the same position aboard Roslia's former flagship, the Avenger. Considered by most humanoids as being exceptionally beautiful, T'Ran in many ways embraces the importance of sensuality in Tezelteän culture, though curtails some of these facets of her native culture that may conflict with Fleet Regulations. A keen pilot and an intelligent officer, T'Ran is a vital member of the crew who is well liked by most of those who serve alongside her. 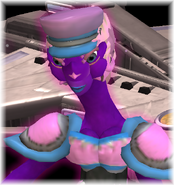 “A fine ship with a fine captain and crew.”

“It is an honour to captain the Aeolus, may it bring us ever closer to understand the universe we live in.”

“A fine ship, with a great captain! Enjoy your position here Kara! And be careful!”