The BT-NR1 Guardian is a model of rapid assault and deployment craft utilised by the New Cyrannian Republic, designed for swift deployment into military engagements. With greater flexibility and combat durability than a typical shuttlecraft, the Guardian is often used by members of Republic Special Forces, and possesses durable armour plating, heavy shields and engines capable of outrunning and outmanoeuvring Imperial capital ships.

During the Cyrannian Cold War, Republic High Command contacted Coruaan Starworks to develop a new type of rapid combat craft, in preparation for what seemed to be an inevitable galactic war against the Galactic Empire of Cyrannus. The result was the BT-NR1 Guardian, which entered service in 15 NE, three days prior to the Mou'Cyran Cataclysm. As a result, very few Guardians were built prior to the fall of the New Republic government, though those that were, such as the prototype under the command of Commander Corvexa swiftly made a name for themselves in battlefields across the Gigaquadrant.

The BT-NR1 Guardian is equipped with heavy laser cannons effective against both enemy starfighters in space, and also stationary targets during planetside engagements, and is also equipped with missile batteries, both of which contribute to the Guardians reputation as the Republic's most effective gunship. Additionally, the Guardian was designed with operational flexibility as a cornerstone, and features state-of-the-art holocommunication equipment allowing for constant contact with allied forces. As such, the Guardian can double as a mobile command post during extended engagements. 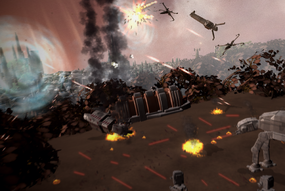 A Guardian during the Battle of Cyranduas