The Arquitens-class light cruiser is a classification of light cruiser developed by Cyroenian System Staryards for the United Republic of Cyrannus during the First Great War, and would subsequently be utilised extensively by the naval forces of the New Republic, as well as the Galactic Empire of Cyrannus and its remnants.

Resembling a similar vessel utilised by the Imperial Alliance during the Second Galactic War, the ship itself resembles a cross between the Venator-class Star Destroyer with the engines of a smaller Ambassador-class Corvette, bridging the gap between the more peaceful vessels designed prior to the Great War and the fearsome ships developed to wage war.

In the Imperial Starfleet, the Arquitens-class was deployed as an escort to larger Star Destroyers, being capable of dealing damage in a battle with its non-phasic shields and reactors as well as its many weapon emplacements. Though retired in the New Republic, the Arquitens-class was among the most common vessels in the Imperial arsenal and are deployed extensively by Imperial provinces such as Legatus Finduilica, as well in the era after the Second Great Cyrannus War, where Star Destroyers are a rarity. Often deployed on border patrols, leading small task forces and to intercept those crossing borders, the ships are feared for their ambitious officers and impressive weaponry. Relatively agile, the Arquitens can match and keep up with most shuttles and can carry at least three ASP-fighters as part of its complement.

Developed and produced during the Great Cyrannus War by the United Republic of Cyrannus to serve as an escort frigate, the Arquitens-class soon became a common sight in Republic fleet operations against the Confederacy of Allied Systems, often fighting alongside the larger Venator-class Star Destroyer as both a fighter picket and an escort frigate. Seeing service throughout the conflict, production of the Arquitens-class was discontinued for a time after the formation of the Galactic Empire of Cyrannus, though would remain in the service of various Republic remnant factions prior to the formation of the New Cyrannian Republic in 03 NE. In the newly formed Republic Starfleet, the Arquitens-class fulfilled much the same role as it did during the war, though was joined by other ship designs such as the more heavily armed Ares-class Assault Frigate.

After the New Cyrandia Wars, Republic Arquitens-class frigates were retired from active service upon the introduction of the Aether-class corvette, which, while smaller and less powerful, were considerably faster. However, within the Empire, Arquitens-class ships re-entered production under two service models: the Arquitens I-class light cruiser, utilised in outlying regions such as Legatus Finduilica and the Arquitens II-class light cruiser, commonly found within Cyrannus itself.

During the Second Great Cyrannus War the class participated in numerous battles and campaigns, and at times faced heavy casualties amongst its numbers. On of its class, the ICS Unfortunate was lost in action and relocated to the Endless Space where it subsequently crashed on Gorga III. In September 2820, the ICS New Dawn was destroyed during the second battle of Ramgotheria. The war caused a strain on the availability of the vessel and Imperial and Legatus shipyards faced difficulties keeping all vessels in service due to the high number of damaged or destroyed Arquitens-class cruisers.

By 2820, Arquitens I-class cruisers were modified for a V2 version, with better shielding and engines. It soon became the backbone of the Legatus navy and was commonly seen patrolling sectors and borders with small task forces or on its own, they were also commonly seen being part of task forces of either Enforcer-class star destroyers or Krakana-class star cruisers. Since the creation of the Legatus Navy the Legatus vessels carry the prefix LSF, known as the Legatus Star Frigate. Two notorious Arquitens-class star frigates were the unique painted LSF Centicore and the LSF Legionnaire.

In the New Empire, the Arquitens II-class light cruisers were reclassified the Arquitens-class command cruiser, and due to the scarcity of Star Destroyers became the backbone of the fleet.

An agile and resilient ship design, the Arquitens-class is easily identifiable as a hybrid between the mighty Star Destroyers of the URC and the New Republic and the diplomatic vessels used by Republic ambassadors, with a wedge-shaped hull and three massive engines. The bow of the vessel is somewhat similar to the Imperial Harrower-class Star Destroyer in that a pronounced split in the hull is present, in which starfighters can dock and refuel. The armament and shielding present on the Arquitens-class allows it to be used on most battlefields, both deep and space and over land where it can provide air support to land forces. The Arquitens-class can be constructed quickly, deployed easily and can support larger ships in a variety of instances, making it an essential addition to any armada.

The Legatus V2 versions of the Arquitens-class are 325 meters in lenght, in addition to its three primary engines it was outfitted with four additional secondary engines to improve its speed and performance. In contrast to the V1 version, the V2 version was equipped with a hangar bay in the pronounced split in the hull, able to hold up to 6 ASP's, 1 Stalker-class shuttle and 2 Stutgart-class dropships. Its lower sections were redesigned as well, with two large doors that led into two additional docks able to hold up to 4 landing crafts. Its offensive and defensive capabilities were improved with better shielding that were quicker to recharge, and it was outfitted with 4 quat turret turbo lasers, two on its main upper hull and two located at the lower hull. In addition to it's torpedoes and point defense turrets it was capable of leading engagements against enemy ships and hold its own against small crafts and fighters. The Legatus version required a minimum of 26 to operate efficienty, but was able to hold a complement of 100 navy personnel and at least four detachments of troops leading to a maximum complement of 200. 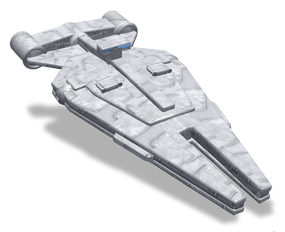