The Accuser (ICS Accuser ISD-620) is an Imperator-class Star Destroyer serving in the Imperial Navy under the command of Captain Gaius Prentus. Introduced in 01 NE at the shipyards over Cyroenia, the Accuser was the 620th Imperial Star Destroyer put into active service. With a crew of six thousand and the firepower capable of subduing entire galactic sectors, the Accuser is a feared threat to the point where it has been nicknamed the Dagger of the Empire, striking fear into the hearts of pirates and slavers that operate behind the expansive nebulas of Outer Rim. The Accuser contains several squadrons of ASP fighters as well as a compliment of Imperial Troopers, walkers and aircraft should a ground invasion be required.

“Not the largest or the most powerful in the fleet, but perhaps the most infamous.”

- Republic News Network, reporting on the Accuser's involvement in the Battle of Nosiso.

The Accuser was commissioned and launched in the fifth month of 01 NE as the six hundred and twentieth Imperial Star Destroyer under the command of the Libertus Captain Gaius Prentus. The initial deployment of the Accuser was to the edges of the Outer Rim, where it was apart of the task-force led by Mortikran with the aim of hunting down the Republic Remnant. The Accuser would not see much action during the early months of her operational history, due to the nature of the Remnant's voyage away from Imperial interests. During this period, Captain Prentus and the crew of the Accuser would often serve under Kendar Bozzel of the Helmsman, much to the annoyance of Captain Prentus.

It was during the famed Battle of Amemoriam that the Accuser would finally make its mark. Under the aegis of Captain Bozzel, the Imperial fleet attacked the Republic Remnant over Amemoriam, an ancient Oikoumene construct on the very edges of the galaxy. During the battle, Captain Prentus' skill in battle led him to become one of the few to win out over Admiral Willelmus Cretacea, managing to destroy Cretacea's flagship, the Last Hope, scattering the Remnant fleet throughout the system. However, when the ancient AI known as the Adjunct activated the station's defences, the Accuser was heavily damaged though was ultimately the only Imperial ship to have survived. After the battle, the Accuser managed to repair itself in the Amemoriam system and managed to save Captain Kendar Bozzel, who had fled the destruction of his flagship in an escape pod. Under Prentus' command, the crew managed to engage the hyperdrive and arrived at the nearest Imperial shipyard soon afterward, where the ship received a refit before being sent to the Outer Rim for a new assignment.

Initially, the assignment to the Outer Rim would be one of tedium for Captain Prentus and his crew. The ship was placed in command of the Nosiso defence fleet, protecting the desert world from those who would seek to liberate the native Nosisans from the harsh Imperial regime. Captain Prentus had always expected that the planet's proximity to regions of space in which the Confederacy of Free Planets operated would lead to trouble some day, and as such established several plans for such a day. Late in 03 NE, the planet would indeed come under attack by Taros Cassynder, who instigated an uprising against the Imperial forces on the planet. Just as the Accuser was about to reduce the planet to a molten rock as per Prentus' orders, a massive Confederate fleet drove the mighty ship off.

Just as Prentus was about to gather a fleet to retake Nosiso, he was recalled to the Trucinex homeworld of Nex where a crazed scientist known as Orthonex unleashed a virulent virus known as Purity into the planet's systems, turning segments of the population into the dreaded Viralnex, a name which evoked horror to those who remembered the last outbreak during the Trucinex War. Clearly informed of the countermeasures against Purity, Prentus had but one option; the mass bombardment of the infected areas of the planet. Unleashing hellfire from the guns of the Accuser, much of the planet was left in ruins though the outbreak was successfully cauterised. This harsh tactic added to the Accuser's infamy across the Gigaquadrant as one of the most dreaded Imperial warships.

Dagger of the Imperial OrderEdit

The Accuser was chosen as the sole Imperial vessel sent to Station Halcyon to discuss the increasing tensions in the outer Gigaquadrant. Though Captain Prentus scoffed at the notion of entertaining the petty grievances of extragalactics in Cyrannus, he was honour bound to avoid adding to the already rife tension. When Halcyon-B violently exploded in the midst of the Conference, many blamed Prentus and the crew of the Accuser for orchestrating the horrendous act of terror. However, the investigation of the Apalos proved his innocence, instead laying the blame on rogue elements of The Civilisation. Ultimately, the tensions at Halcyon would have a hand in conflicts such as the Great Xonexian Schism in the Outer-Gigaquadrant, though as Prentus predicted, the Cyrannus Galaxy remained uninvolved.

“This is Captain Gaius Prentus of the Imperial Star Destroyer Accuser. Prepare to be boarded.”

Returning to the Core Worlds, the Accuser was assigned a new task of patrolling the Quadrantia-Cyrannian Wormhole to ensure that the levels of smuggling and piracy were brought under control. Content with such a simple assignment after months engaged in the Outer Rim Wars, the crew of the Accuser nonetheless remained alert in the event of trouble. During one of the Accuser's patrols of the wormhole, it boarded the freighter known as the Falcon under a tip from Imperial Intelligence that Cogsangui outlaw Voro Acetenus may be aboard. Captain Prentus himself searched the ship, though its occupants -- namely Claire Rambo and Corva -- managed to hide Acetenus from his sights. Against his better judgement, Prentus decided to let the ship go.

The Accuser would remain in this assignment for several months before being redeployed to the borders with the New Cyrannian Republic, where it carried Grand Mandator Aporyan to a peace conference hosted by Proconsul Apollo with the aim of declaring peace between the Empire and the Remnant of the Confederacy. Though Captain Prentus despised working with Confederates in any records, he was forced to put aside his differences when the Cyrannian Syndicate attacked the Conference. Ultimately, the Syndicate ship was driven off but not before disabling the Accuser.

After the peace treaty was signed, the Accuser's power was restored and it returned to Orbispira for its next assignment.

As with all Imperator-class Star Destroyers, the Accuser measures 2,600 metres from bow to stern, making it a medium sized addition to the Imperial Navy. The ship is equipped with an advanced ghost-phasing device and protected with highly advanced Imperial shielding technology that is considered to be a hybrid of metric shielding and non-phasic shielding granting the mighty vessel immunity from all but the most unrelenting enemy barrages.

As with all Imperial ships, the Accuser tends to rely heavily on its turbolasers during space combat, however it is also armed with far more devastating weaponry deemed by many lesser civilisations as being near-mythical in design. Coupled with standard weaponry including vortex and hyperspace torpedoes aimed at destroying enemies across many light years, the Accuser is also equipped with highly experimental weapons befitting its title as the Dagger of the Empire. Though classified to all but the senior staff of the Accuser, the Star Destroyer is equipped with a weapon system known as the Space-time Metric Weapon System, which when launched alters the very dimensionality of space-time around the Accuser's target, warping the cosmos in a cataclysmic implosion designed to completely annihilate entire enemy fleets in the blink of an eye. Ultimately however, Captain Prentus would only ever use such a devastating weapon if the situation called for it as he much prefers using tactics and conventional weaponry to defeat his foes.

As with all Imperial Star Destroyers, the Accuser is also equipped with a rapid-fire superlaser in its ventral hanger bay designed primarily for cracking the planetary crust of an enemy world, or destroying much larger ships within a short space of time. In addition, tractor beam projectors, point laser defence systems and even devastating displacement cannons dot the hull of this predator of the Gigaquadrant.

Since the mass refit in Novemex 04 NE, the Accuser, as with all Star Destroyers are equipped with a reactionless drive which is known simply as the Corona, possibly originating from ancient Oikoumene technology provided by the Emperor. The mechanics of the corona drive are highly classified within the Empire, though the chief engineer of the mighty Star Destroyer informed the captain that the drive manipulates the space time metric to the point where the ship itself undergoes a deformation in which it essentially "swims in space-time" at unimaginable speeds toward a destination. The drive is controlled by the Accuser's transentient artificial intelligence and is immune to the cons faced by a conventional hyperdrive.

Though the corona drive would theoretically allow the Accuser to traverse the Gigaquadrant within a very short space of time, the protective barriers around the Cyrandia Cluster prevent this and all other forms of extragalactic travel, limiting entry or exit from Cyrannus to the various wormholes scattered throughout the galaxy. Within Cyrannus however, the Accuser can also create artificial wormholes to arrive instantly at a destination, though this is also hindered by the Barrier. When travelling at sublight, the Accuser uses the corona drive in conjunction with the ship's ion engines. 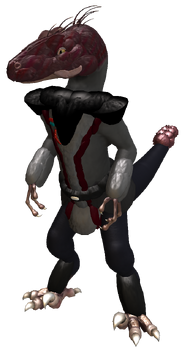 “Pff, who does the captain think he is, pulling the Falcon into that horrible "thing's" hangar bay!”

Retrieved from "https://spore.fandom.com/wiki/Vehicle:Accuser?oldid=748449"
Community content is available under CC-BY-SA unless otherwise noted.