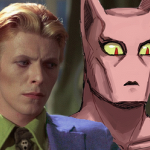 Hello all. This here, is my user page, as you can tell. Not much goes on here however. It took me a couple of years to actually rework this thing, so yeah, if something gets updated don't go here. Anywho, big Godzilla fan, as you can tell, and much of my fiction will probably contain references to it. However, I also insert some Anime references in it, whatever catches my interest and all. Most of my fiction references historical cultures and empires, such as Prussia/HRE, the Celts and Greeks, among others. Aside from that, I also like to focus my stories on character development and the like, with a like towards villains.

I'm somewhat of a perfectionist, so expect my fiction to have a lot of detail about their culture, history and societal details, and for me to constantly edit and tinker with the fiction multiple times, if I don't forget about them.

Ogres of the Hills, The Boggart

“Damn things are hard enough to clear out when they're alone. Once their tribes get moving? Pray to the Gods you have the strength to survive.”

The Boggarts are a savage, barbaric species of Ogre Deiwos that inhabit the swamps, boonies and caverns near Mendel and Zartusian territory, and driven by a murderous hunger for flesh and meat. While along they are quite deadly, their solitary life style can end very quickly when they gather into tribes under a Warlord, and begin stripping the lands of anything they can eat and devour. Both Mendel and Zartusa organize warbands and knightly regiments to head into the swamps to clear out Boggarts periodically, but their strength, cunning and resilience makes them extremely difficult.

While Swamp Boggarts are the most common, they can evolve and adapt to suite whatever environment they take onto, with Rock and River Boggarts being just as dangerous for anything that they consider a meal. While not many Tribes of Boggart exist, those that do are incredibly dangerous and threat to even the most ardent and powerful warriors of any nation.

While Zartusa and Mendel histories do not know when the Boggarts began, their ancient legends and sagas speak of them at around the same time, with large Boggart appearing to capture women and children to eat in their caves and swamp hideouts, only to be slayed by their heroes and champions. For ages, Boggarts were one of the greatest dangers within the hinterlands surrounding both nations' territories, though given their solitary nature, it made it easy to lead them into traps and ambushes when warriors worked together to defeat them. However, at one point, a change occurred, when a Mendel Warband, accompanied by their allies of various nations, sought to attack a marauding River Boggart. As they were about to entrap it and strike the killing blow, several Swamp and Cavern Boggart charged in and smashed many of their troops with basic clubs and other brutish weapon.

The Mendel gave a retreat, and, in their escape, encountered a group of Zartusian Knights and State Soldiers who were also in the retreat, having been attacked by a coordinated effort by several Boggart and killing many of their troops. The two meet, and decided to fight to break down and destroy the Boggarts before their numbers could swell and threaten their troops and people not far away. The two commanders meet and began to plan out an ambush and trap for the Boggart. The Boggarts, when they arrived at their location, found only a few warriors left from both sides, standing to oppose them.

As the Boggarts approached to devour them, the two armies appeared over the hills, and sent several gigantic rocks rolling down the hills, crushing several of the Boggarts, before charging down the hills themselves, attacking the surprised and remaining Ogres, and crushing their armies. The fight went for many hours, before they managed to hunt down and kill every Boggart they could find.

Since that day, Boggarts have been a massive threats, forcing the Shell-Goblins to go to the Mendel and Zartusa for protection against the Boggarts. Despite the efforts of the two, many Tribes have begun to pop up, and although few in number now, there are many Boggarts within these tribes to organize raids and attack others for food.

Quotes from others Edit

== Notes == - Secondary empire. Cannibalistic Ogres that haunt the numerous foothills around Mendel, Zartusian and Amatuskami lands, with no regard for anything but fighting.

Musical themes of my empires Edit

Every Empire has a theme. I just put them on a list here. Links on the way!

Reason behind the themes Edit

Fiery fireworks were put into the air on As Radan as a massive Grox flagship landed on the planet, a magnificient fortress of terror. Grochius made his first step on the conquered world, savouring the dead, frozen air. The smell of victory, he thought. To his eyes, a glorious work was revealed. Despite the fact that some survivors escaped, the mission was still successful, and the whole planet was devastated. On the destroyed buildings of the lower species, new architecture was erected, and Dronox workers have already constructed huge spires in Grochius' glory. The Grox king smiled and walked a blood red carpet towards a huge plaza that has been just created from the ruins of the Capital Spire of the Kaelar capital. Grox warriors in battlesuit bowed to him in obedience, as did his best lieutenant, Dronox Commander Ixxan. However, Grochius noticed another person in the mass of soulless machines, one he did not know before. It was certainly not a Grox. This newcomer was far, far taller, dressed in black robes and having a twisted, fish-like head. Like everyone else, he bowed to Grochius, but he still retained his imperious look, even when he was a servant. The Grox ruler turned to the strange creature and spoke to him.

The creature stood from his knees, now fully revealing his magnificience.

HPoD - I am the High Prophet of Disdain. We, the Grox Followers have come to aid our masters in their conquest of our true home. We are strong and we are many. We shall bring the Apocalypse upon the Rades-spawn, the Draconis and the Zazane, all in one, deadly strike.
Grochius II - We? Where are your armi-

Grochius did not understand how that happened, but he realised he is now surrounded by the legion of large fish-like creatures similar to the Prophet he was talking to, clad in purple and gold armour.

Grochius II - Ah, I see. Quite a magnificient army. I see that you are powerful speaker to bring such legions under your sway. As such, you would have a fitting place for my plan.
HpoD - Your plan, master?

Grochius stomped his foot, commanding other Grox forces to listen. His soldiers surrounded him in circle, ready to bring his word into action.

Grochius - Brethren! Our new victory is nothing but a prelude - a prelude to the conquest of the whole galaxy! No rest shall await us until Andromeda will belong to the Grox. However, know that our enemy, while nothing compared to the might of the Grox, is powerful. We must never underestimate our foes. However, we would not be the mighty Grox if we would just bow our heads and succumb to the stronger? No, for it is the way of the Grox to cry out against fate and find a way to overcome the greatest odds with faith in our supremacy! Listen, Grox, for the veil of uncertainty of our is cleared now. In my mind, a location of the holy homeworld, Atzerry, was revealed. On its land, a weapon powerful beyond our comprehension is hidden. I shall now unleash this weapon from the ancient age, as was prophecied. With my absence, Ixxan and the Prophet would lead our forces. FOR THE GROX!

Grochius teleported from the plaza to his spaceship which has promptly left the planet and vanished deep to the core of Andromeda. To Ardenta.

My favorite Discussion Board rant Edit

Well, while that would explain the name thing, and why so many people constantly do stupid things, and why I'm somehow involved in every extremely significant encounter with any alien race, and why the supposedly stronger evil races like the Xhodocto are defeated so often, or why I got to the Troodontids planet through such a convenient wormhole that species of my tech level should be unable to use, and why the history of the Earth and humans is so much more complicated than the others, or why universal translators misspell things, or why so many of us resemble empires from 20th-21st century Human science fiction, or why anyone would ever spread their population as thinly as the Dominatus Tyranny does, or why there is absolutely no religion in the Troodontid Empire what-so-ever, or why anyone isn't religious given all of the immortal races running around, or why Phase-hunter says and does the things he does, or why at the same time no one can ever get our of hell, but the Architect got out of hell and everyone there mentally projects their last body but also several of them are in the same mangled forms, or why our empire had no reaction to anything that it should have reacted to until recently or why we waited so long after heading toward them with a massive fleet to finally get to and attack the Troodontids, or why I do almost all of the talking for my empire even though I shouldn't, or why at the same time all people go to heaven or hell upon death yet some people are spared an endless cycle of death and rebirth by going to heaven, or why almost every empire's flag, if it has one, looks like it was done in MS paint, or why Callanni has absolutely no excuse not to figure out what the Dominatus did with the Drodo but doesn't tell everyone, or why tomatoes and wheat evolved independently on the Loron's and human's home planets, or the several other examples of unrealistically convergent evolution, or why I know about many of the things I just spoke on but won't again after this post, but I can't see what mechanism would bring to life a bunch of crappy fan-fiction empires on some wiki and give them conscious experience. Because of that I must reject this hypothesis.

I am an Official Member Right? RIGHT??!!

Info about me Edit

Info about me. Alright, My favrite video games go from here.

9)King kong vs Godzilla-It was goofy but fun.

8)kung Fu panda 1 & 2-Funny and Great action,2 really improved upon what one estaplished.

6)aliens series-1 was terrifing and just awesome,2 was even better,Game Over man!3 was, meh.4 haven't seen,Avp 1 was ok,Avp 2 was bad.

5)The Dark knight-Pretty darn good. The action was better then in Batman Begins,and the joker was really portrayed well by Mr. Ledger.

4)godzilla vs DESTROYAH!-This movie was amazing.the monsters look good,the actresses look good =) jk, and it was very well done.If your not a monster fan, this is a good place to start.

3)Gamera 3-Gamera is godzilla's rival,every fan wants them to fight, bu the two companies are like "No fight for you!". gamera's last herryah is just as good as GvD,godzilla's last movie,but even better.Must see!

2)King Kong-The Origeneal will always be my favrite.It pushed the boundries of movie technology at that time and gave us a masterfull movie. but Kong's love intrest NEVER STOPS SCREAMING!

1)Gojira(1954)-Just as good as the Orgineal Kong, if not better because the main female charater actually is usefull to the plot and doesn't scream the whole time.This is a most see.If you haven't seen it, your missing out on a great story.

Retrieved from "https://spore.fandom.com/wiki/User:Zillafire101?oldid=828390"
Community content is available under CC-BY-SA unless otherwise noted.