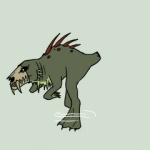 “When life gives you lemons, you squeeze lemon juice into the eyes of your adversaries”

The god the First Gigaquadrant needs.

Greetings, I am The Kaernk. I obtained Spore back in the 2013 on Steam after wishing to play the game again. Years before that, I owned a copy of Spore on a disc (which was highly enjoyed) before I mistakenly lost the disc itself. A while after gaining Spore on steam, I went a long time (almost a full year) before I really began playing it again. What re-kindled my liking for Spore was an unfinished Creature Stage where one of my species was waiting patiently, and once I discovered the vast fiction universes on the Wiki, I wanted to join and share some of my work. I would be happy to include my species into any Collaborative Fiction, or form a fiction Empire with another race. Overall, I am happy to see such a degree of creativity for an older game such as Spore, even if I am a bit late to the party.

Celophicix (Currently non-canon, will be remade)

Kaxirr (Currently non-canon, will be remade)

Each musical piece reflects on each races history and overall personality

(Listed in order of priority)

-Work on collaborative fiction for the Andromeda Xilics

Retrieved from "https://spore.fandom.com/wiki/User:The_Kaernk?oldid=694491"
Community content is available under CC-BY-SA unless otherwise noted.