“Any sufficiently advanced technology is indistinguishable from magic”

DeviantART: Spacer176
Steam: The Geth Smasher
“Confidence is about not worrying about what others think of you. Be the person who stands up when everyone one else is too concerned to.”

I'd like to point out I don't enjoy sounding like i'm full of myself. I never really see myself one of those 'pompus genius' types you sometimes get; waving their Oxbridge PhDs or science-fair trophies around thinking everyone around them is as smart as a brick. That's not me and I don't want it to be.

In my opinion if you have brains you know you won't like being treated like you failed in pre-school, So why do that to other people? Treat others how you want to be treated yourself I say,

A few key things to know about me:

Science is a bit of a passion for me and I'm a bit of of a polymath (It's difficult to not make this sound like i'm blowing my own trumpet without knowing me personally). If I see a topic of science that intersts me I will research to get an understanding it.

I've mentioned how nerdy I can be, but I'm also a social person and enjoy challenging my brain. If you're stumped at something I can help to explain. Also as you might be able to tell from my first fiction - the draconis - I'm somewhat intrigued by dragons, mainly the western variety, but i'd still rate my interest in Starfleet higher than my interest in the fire-breathing lizards of myth and legend.

My third greatest love? Warhammer 40,000. In my opinion; once you move past the dice and the idea that you're essentially giving orders to 2" tall bits of plastic it gets very cool and very macho (e.g Planet-wiping nukes, soldiers wearing tanks with legs, an officer with a giant mechanical claw). Believe me: mentioning a gun (that is essentially a mini-rocket launcher that fires like an SMG) to someone sounds much cooler than saying a 2" plastic model has said weapon. The founders of GW weren't nerds, they were just as manly as anyone else.

The fates command you to stop being so procrastinate!

In order of acceptance

Tropes for my fiction[]

This is just for fun but now I have more than two published characters and a few more in my head I figured I could note what makes them special.

I wrote this anthem out of boredom. Lyrics are sung to the chants of the choir. It doesn't entirely match but you do have some creativity when it comes to gibberish chants. Surprisingly several words of the song fit better in English than in High Dracid.

Glory of all, the Paragons.
In all, they survey, we rule.
With skill, with command, we are just.
We toil, we care, we thrive.

In peace, In war, we bring glory.
We honour our duty, our homelands
May all respect our prestige.
For we are the chosen ones. 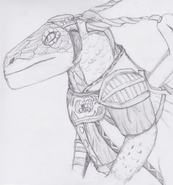 Sometimes I Amaze Myself[]