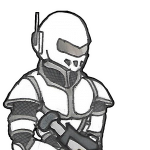 Hello everyone. I'm Glynn. I'd love to collaborate fictions with everyone! I am good at making ships and know some creature creator tips and tricks. I am currently trying to finish my fiction, so if anyone wants to collaborate or ally with one of my empires, contact me on my talk page.

Includes my fiction galaxies and timelines.

Empires in Current use Edit

Empires that I still use and edit on a regular basis.

Empires that I no longer intend to expand on or are canonically defunct as of late.

A List of characters organized by the civilization they call home.

On the Abyss, by Dr. Nu'Iva Shal

Retrieved from "https://spore.fandom.com/wiki/User:Glynn_Tarrant?oldid=855075"
Community content is available under CC-BY-SA unless otherwise noted.