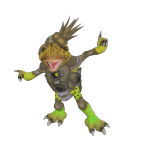 Specimen 083. At least that's how that weird FBI guy at my door calls me.

Read My Fiction section
Hi there! I'm Dinoman972. I'm a Spore player, a taxonomist and I'm currently working on a fiction on this wiki.

Well, I could say I am the typical average creator. Not too good, nor too bad. Sometimes I make a creation that is deserveful of pride. Some others I make a master aberration. In terms of creatures, I like making simple creatures that somehow look nice despite not having much details, except in some cases. Many of my creations you'll see in this wiki (creatures overall) are just retweaks of creations I made in the past, but there are some original ones too.

Most of the creations I published as of now are in my fiction's category and have a role in it. However, I am also making a "saga" of creations known as Re-Creations, most of which won't participate in the fiction and will not be canon to the fiction universe at all.

I'm currently developing a fiction in the Fiction Universe, which I call Llurebleg Stories. It is currently located in the Lapida Galaxy. My fiction's protagonists are the Llurebleg, a species native to the planet Xuz Fareh, with a tiny size but gigantic dreams. With the desire to know about their origins, they start exploring the galaxy around them, mainly doing some research on a mysterious civilization that lived next to theirs. On their voyage, they will explore a ton of planets, discover amazing wildlife and meet various other sapient species, such as the humble Androg, the fearful Duthbah and the arrogant Fragan. The fiction will develop around the Llurebleg, and I will add more pages as these little explorers discover their subjects.

NOTE: Most of my fiction is probably going to be quite weird. Expect unrealistic and somewhat childish plots, unexplainable organisms, and wildlife getting more attention that the sapient empires themselves.

Click here to see a category which includes all the articles currently in my fiction.

Click here to see a list of "leaked" planned features I want to include in my fiction.

My contributions to the wiki Edit

Most of the work I do here is classifying creatures taxonomically. I think I do well, but I make mistakes rather often, overall now than a lot of changes are being made to the system. I have also done other things, like adding infoboxes to pages, moving images to infoboxes, adding links and adding trivia to non-fiction pages.

As you might see above, I have done a fairly large number of edits since joining the wiki. Although I must admit most of them are very minor, such as fixing typos and other mistakes I made in the previous edit.

If you wish to tell me about something (eg.: fiction collab, taxonomy discussions, etc.), the best way would be posting a message in my wall. You might try to contact me in Discord as well, but I don't guarantee I will always be able to respond.

My sandbox
Retrieved from "https://spore.fandom.com/wiki/User:Dinoman972?oldid=818318"
Community content is available under CC-BY-SA unless otherwise noted.