The Tribal Stage is the third of Spore's game stages, and deals with the independence of species, forming simple societies, and outcompeting other tribes with cooperation or domination.

After the player's species has evolved sapience, the player gets a choice to advance to the Tribal stage. The player can no longer evolve into a new species, and is now in a real-time strategy style game, and must look after a whole tribe.

There are five other tribes along with the player's, which can either be destroyed or befriended. Depending on the means the tribe used to overtake the neighboring tribe, by forming an alliance or invading the other, their actions will influence the archetype of the next stage.

Tribal Planner can be accessed by moving the mouse cursor over the main tribe and then clicking on the big, blue button among other buttons.

Within the Tribal Planner, the player can customize their own tribe by purchasing and placing the variety of tool huts with required food. Both individual instrument and weapon huts are available depending on the species' diet, but others are inaccessible, and the player must conquer or ally with opposing tribes in order to acquire them. There are only 6 spots where huts can be placed on.

The Tribe Outfitter is the successor to the Creature Creator. Unlike in the Creature Creator, the player can no longer customize the creature's body, instead, they can be clothed with accessories. They are primarily used to augment the species' abilities (social, combat, health, or gathering) power to deal with circumstances easier, but others are entirely decorative. Similarly to the Tribal Planner, some outfits are unavailable unless the player has conquered or allied with other tribes.

Tools are certain hand-held items that give tribe members different abilities, different tools have different uses. They are divided into three types: Food and Healing, Instruments and Weapons. Which tools are available depends on your diet and how many tribes you have allied or destroyed so far. Whether a tribe is allied or destroyed does not matter for which tools are unlocked, only how many tribes have been dealt with so far. The order in which tools are unlocked depends on your diet. Although up to 9 tools can be unlocked (8 as carnivore, who don't get Gathering Canes), only 6 can be used at a time. Previously placed tool huts can be replaced if needed.

Tribe members can equip tools by having them interact with the relevant tool hut. They will not do so on their own, only when directed to. A tribe member can only hold at most one tool at a time. All tasks except playing instruments or healing can be done while holding any tool or none at all, although tools vastly improve the efficiency of those tasks they are intended for.

The Chieftain leads the village and cannot acquire tools like normal tribal members. However, the Chieftain has the most complex tool in the game which is equally powerful as the other weapons, instruments, and other special tools that tribe members can wield. Their staff doubles as a gathering cane, and a fishing spear, and as a sort of club used for attacking other tribes' members. If killed, a new chieftain will soon appear at the hut.

Food is a new currency in this stage, preceded by DNA, and are necessary to feed the tribe members, purchase a new tool hut, breeding for the tribe member, gifting the opposing tribe to improve relationships, domesticating the creature, etc. There're 5 types of foods that can be acquired throughout the stage: meat, fruit, fish, seaweed, and eggs. Occasionally, wild animals and disliked tribe will steal the player's tribe's food.

A new method is to domesticate a wild species throughout the stage. Usually, pets are able to produce eggs for tribe members to collect and consume and defend the tribe against threats. They can be domesticated for 15 food.

The following table lists the consequence abilities that can be gained by playing in the previous stages for use in the Tribal stage.

The following table lists the consequence abilities given by the different types of victory in the Tribal stage.

In the Tribal stage on Easy:

In the Tribal Stage on Normal:

In the Tribal Stage on Hard: 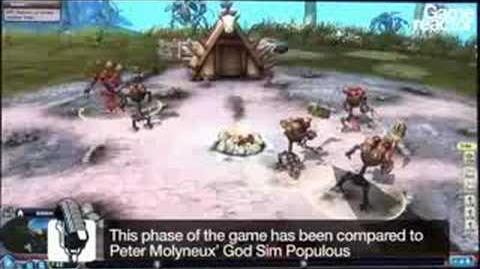 A rare Symbol. Maybe of an old colony.