A Trade Route in the Space Stage

“Consider the simple act of trade. If you believe that possession of an item would increase your happiness, and if my happiness would be increased by selling that item to you for a certain sum, then the trade makes us both happy, and the amount of happiness in the universe is increased.”

- Tablet of Prosperity No. 4

A Trade Route is the exchange of goods, such as spice and/or Sporebucks between two or more nations or space empires.

In the Civilization Stage, an economic nation can propose a trade route with another nation. If that nation's relationship is above 15, the trade route will begin. After a trade route is proposed, a road forms between the two nations and all economic vehicles that participate in the said trade route will generate Sporebucks as they drop off their goods at each city. If there is an epic standing in the middle of a trade route, you'll usually need to kill it, charm it out of the way, or guide the vehicles around it.

You can cripple a trade route's profit by destroying economic vehicles that are aiding your enemy. They are also a viable source of money, as when goods are "delivered" by your vehicles, they give Sporebucks depending on their economic power. It can be somewhat profitable over time to have a few economic cities and establish trade routes with allies, or simply just prevent those initial economic cities from being overwhelmed by other nations. When there're two other nations at war with each other, and one of them finds out that you are trading with their enemy and you're also that nation's ally, they'll call you and ask you to stop trading with their enemy.

In the Space Stage, your empire can propose a trade route with any empire that has at least a +30 relationship. A trade route will then be enacted between their star and your closest star, and the Economic takeover bar will gradually fill up. If you visit your colony which has an active trade route with another system, and the said system has spice production, you'll gain the spice from the target system alongside your colony's spice. Once it's full, you can purchase the star system for a reasonable amount of Sporebucks, which is based on how many planets are colonized and their T-scores. However, you can only have 5 trade routes at one time, so it's a good idea to spread them out among your friends and allies. If you have filled up your trade route bar, you may purchase the system.

However, if the empire demands more money for the purchase, a small relation penalty will occur and the Economic takeover bar will reset. You can also contact the empire, open up diplomacy, and select the option "I would like to end our trade route", and the trade route will be removed without a negative relation bonus. You may wish to restart the trade route or try establishing a new trade route with another empire. 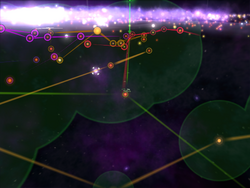 A completed trade route in the space stage.
Русский
Community content is available under CC-BY-SA unless otherwise noted.
Advertisement