Steve is the pilot of a spaceship (some insist that he is the ship, but the museum in Adventure Town has a statue which claims Steve to be a humanoid alien) that can be found within the Galactic Core. He is the only character in the entire game that speaks the selected language (except for Greek, Dutch, Russian, Polish, Portuguese and Norwegian), and awards the player with 42 instances of the Staff of Life (known in the development stages of Spore as the "Genesis Device"). Your discussion with Steve will also add the tenth Galactic Object to your collection. Most of the interaction with him is a cameo.

Steve's spaceship itself is an easter egg. With the exception of the loudspeaker on top, it's a near-perfect replication of the UFO featured in the Sim City 2000 game cover.

Upon entering the Galactic Core, a cut-sequence is played, where a mysterious speaker (Steve) greets and congratulates the player for their progress. A deep voice makes the following speech during a series of animated 3D vortex scenes:

Greetings my friend!
You have traveled very far and overcome many obstacles.
Along the way you have encountered many of your diverse, far-flung siblings- -
Precious few of them will make it this far.
Your heroic efforts have proven you deserving,
worthy of advancement to the next level of your existence.
The universe you inhabit is but one of many
countless worlds, unseen but yet connected.
Your creative efforts have not gone unnoticed.
Indeed they have spilled into these other, unseen worlds
just as your world has been enriched by them.
It is now time for you to join us- -
Join us! Mwahahahaha!!
No, just kidding. It's not scary.
Indeed. The times ahead, they are good.
Really, really good.
Some of you may ask, who is this mysterious voice who knows so much and possesses such great powers?
I'm glad you asked...

After journeying through the Galactic Core, your ship drifts through space until it comes across a diminutive UFO, accompanied by an equally diminutive/squeaky voice and cheesy game show-style music. During this interval and shortly beforehand, your ship is in the game screen.

I'm Steve!
You are now to be given the power.
Yes, that's right, THE POWER.
The power to create and spread life, intelligence and understanding throughout the cosmos.
Use this power wisely.
Use this power so that we may one day become AS ONE...

Oh... one last thing.
We are nearly sold out on the last phase of a wonderful time-share opportunity on one of our larger stars- -and a rare planet in its orbit.
If you are in the neighborhood, we'd love to have you by for a free breakfast and short presentation.
Just look for the third rock from Sol.

The player is then awarded with 42 uses of the Staff of Life, before being returned through the Galactic Core. After this point, one can never meet Steve again, unless one starts a new save file. Because of this, 42 is the maximum number of Staffs of Life that a player may ever have in a save file.

The Cut-Scene in Technical[]

During the first 2 seconds, the ship flies in with 3D effects trailing behind it that resemble blue, cyan, and purple round circles formed by visible waves of energy, similar to that of the 2005-2009 title sequences of the British sci-fi television show, "Doctor Who". Near the end of the tunnel, llamas (which could be a reference to the Sim City Series' obsession with them or Monty Python and the Holy Grail's opening credits (the flashy part) in which llamas are mentioned), are shown round the sides of the tunnel. The camera then jumps to the side and your ship moves very slowly forward from the right for about five seconds. Steve's UFO model rushes in from the background on the left and your ship immediately ceases motion. Steve's speech above is performed for the remainder of the scene.

As the spaceship moves around, heavy but low quality blur effects are applied on the spaceship as he moves around in sinusoidal motions. His four arms also move around in a pattern. The movement and blurring in this scene may vary depending on your graphics settings.

Less than a second after he says "I'm Steve," the camera switches to view the front of Steve's spaceship above your own (it appears that your ship is closer to the camera but below Steve's ship). In this point of view, it appears as if he has a top-right to down-left bouncing motion at the same length/distance from his first primary position when he does his speech. In the background, you can clearly see a background effect of purple 3D screen blended (meaning the color will have more brightness when layered on their own particle objects) "cloud" particles placed around the scene. The radius from these particles increase when Steve talks during this part.

The camera then begins to pan up-left, This motion gradually decelerates and ends until Steve ends the sentence: "...The power to create and spread life, intelligence and understanding throughout the cosmos." During the scenes, golden-yellowish pixie dust flows around in the background.

Then, the camera jumps to the left and views the ship slightly down and at an angle between 0 and 45 degrees from the point of where your ship is facing and starts to zoom out slowly. The back of Steve's loudspeaker is shown here for the longest time, about 14 seconds.

After Steve says "In a metaphorical sense.", the camera jumps out to the side of the camera and rotates around the ship and jumps back to face Steve's ship when it's completely facing your spaceship. This jumping happens right at the first word of the speech fragment: "...a rare planet in its orbit."

In this last part, Steve's ship model is instead bouncing top-left to down-right. In his speech, he mentions a free breakfast and short presentation. The total length of the scene excluding the 3D vortex scenes is about 1 minute.

Footage of the 'Meeting Steve' sequence 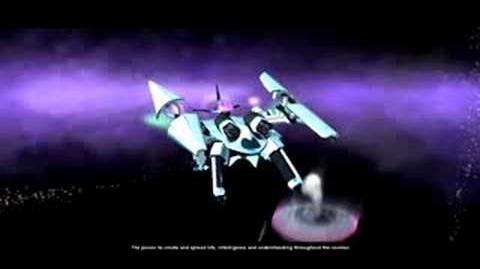