Static Cling is the unique ability of the Diplomat Philosophy.

This power can be used to disable ships or turrets while they are under attack, or while spice and artifacts are being stolen. Once selected, it can be fired on the ground or a target to activate. It is useful for whatever the player would wish to do undisturbed, whether this is bombing an enemy empire's city, or using a Happiness Ray on them to resolve their differences (this is especially useful when allying the Grox), or collecting samples of the local flora and fauna.

Buildings and turrets affected by Static Cling become engulfed in countless musical notes, similar to the notes expelled from Religious vehicles during the Civilization stage. These musical notes are visuals that indicate the colony's activities are disabled. 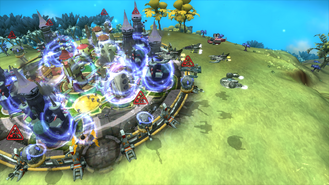 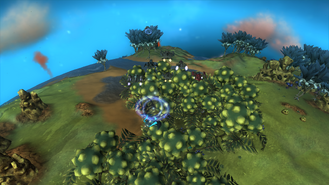