SporeWiki
Register
Don't have an account?
Sign In
Advertisement
in: Creations by Maxis, Cells, Cell stage,
and 3 more
English

Stabber is a Maxis-made cell, present in the Cell Stage at Level 3. Stabber, as its name implies, has many Spikes around its body, giving it a good defense.

A good strategy to defeat this cell (once it does not have epic proportions compared to your cell) is having a spike attached near the back of your cell, and simply standing motionless, facing away from it. It will try attacking, and will be hit by the spike. After repeating this process, Stabber will still try to attack you, even if one more hit will result in his death - which often happens. There is no point in assaulting it from a side, and even its tail can be quite dangerous, as it might turn around, stabbing the player's cell in the process.

Stabber may be related to Stabbella, since they are visually similar, and if noticed, Stabbers never attack Stabbellas, while they always attack Noseys.

The following parts can be harvested from this creature by killing one: 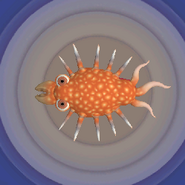 An attempt to make Stabber in the Hidden Cell Editor.