Stabbella is a Maxis-made cell, appearing in the Cell Stage at Level 3. It is closely related to the Stabber, and if in sight of one, won't be attacked.

Stabbellas have many spikes on its sides, making it slightly hard to kill. However, their defense can be outsmarted by a proboscis. Its mouth and rear aren't covered in spikes, which are their weak points. Stabbella is also capable of doing Fast Turns. They seem to come either alone or in groups of 2-3 (accompanied by the odd Stabber or two). Noseys are often seen attacking Stabbellas.

Abilities that can be harvested from this creature[] 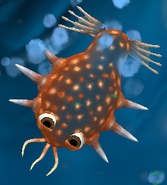