Spore Hero Arena is an adventure/fighting game developed for the Nintendo DS. It was released on October 6th 2009 as a spin-off counterpart game of Spore Hero.

An evil meteor is wreaking havoc across the galaxy's fighters, and only your creature can stop it.

The game begins with a spaceship being hit by an asteroid and crashing into a planet. When the cutscene ends, the player will create their creature and it will step out of the spaceship. After exploring the planet, you creature will meet a lobster-like creature named Yeedo, who then tries to make the player get out of his home by attacking them, but he is too weak. After you defeat Yeedo, he claims that the only reason the player's creature was able to win is because of a blue meteor fragment that you had picked up before meeting him has made you stronger, and then proceeds to tell you about his past life as a well-known blacksmith. One day when he was younger, a red glowing crystal fell from the sky, and all creatures, including Yeedo, wanted it. Yeedo made seven medals out of the red rock, and he was envied more than ever. Battles and tournaments were held to see who would win the red fragments, and in the end, the creatures who did win them became mutated, and Yeedo quit his job to flee in shame. Yeedo then gives the player a red meteorite fragment in hopes that you will make it of use, and helps you repair your spaceship. Afterward, Yeedo goes with you in your ship and gives the player advice throughout the game.

Later in the game, you must battle Count Vaart on a faraway planet and then return to the first planet to destroy the medals. However, once you get close to the planet Eses Minnobah, you crash on an asteroid, and get eaten by a large asteroid worm along with the other arena champions. You must fight through the creature and return to Eses Minnobah. However, once you and Yeedo make it to his home, he accidentally melts the medals together and becomes a scythe-armed monster. You must collect all the red medals to reach Yeedo's size and defeat him in a battle to save the galaxy.

After you win the battle, a cutscene unfolds that depicts you throwing the medals into a volcano, completely destroying them. Yeedo goes back to normal and the corruption dies away, and he returns to his loved ones and you look for another great adventure. However, a small bug goes towards a red fragment and gets corrupted, leaving an opening for a sequel.

The exploration mode allows players to move on planets to find other creatures to talk to. Creature parts are scattered across the world and can both be found in the wild as well as obtained by completing various missions such as races.

The main battle mode is comparable to sumo wrestling, as the main objective of arena battles in Spore Hero Arena is to knock opponents off the arena. Players can attack enemies in various ways in order to deplete their health and increase their knock-back when pushed.

There are multiple battle modes. The main Battle Royale mode is a deathmatch mode in which players have limited lives and win by eliminating all opponents by knocking them off the arena until they run out of lives. The Battle Royale mode is referred to as a "Time Limit" match if there is a set time limit, and as a "Sudden Death" match if the amount of extra lives set is zero.

The Capture the Egg mode groups players in teams of two, and the two teams must capture the opponent team's eggs by picking them up and bringing them to their nest while their eggs are still in the next. Capturing the opponent's eggs the required amount of times will result in victory.

The Hoard and Hatch mode is a free for all mode in which players must move eggs that spawn on the map to their nest and prevent others from snatching them while they hatch over time. Hatching the required amount of eggs will result in victory.

The King of the Planet mode is a free for all mode in which the main objective is to obtain the most points before time runs out by picking up the crown and preventing others from snatching the crown by hitting them. Standing in special scoring zones will increase the rate at which points are earned.

The game features a multiplayer battle mode for up to 4 players, who can be connected locally with wireless connection or across the world using the Nintendo Wi-Fi Connection. The main Battle Royale mode is playable, along with the aforementioned Capture the Egg mode, the Hoard and Hatch mode, and the King of the Planet Mode.

Like most Spore games, the main character is customizable using the Creature Creator. For the first time on DS, the creatures are fully rendered in 3D. Over 150 unique parts can be used for creatures, including parts from Spore and the Spore Creepy & Cute expansion, along with some new parts specifically for Spore Hero Arena. 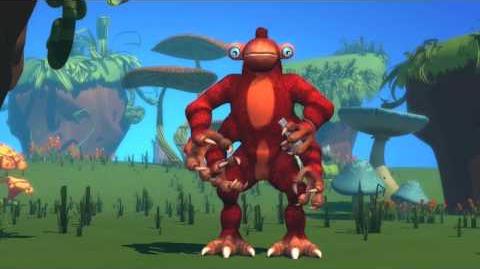 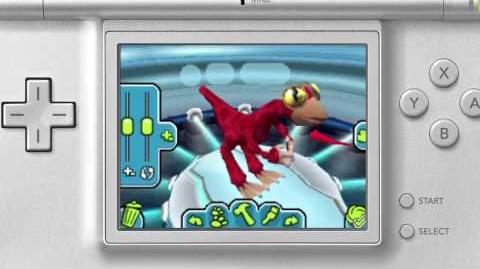 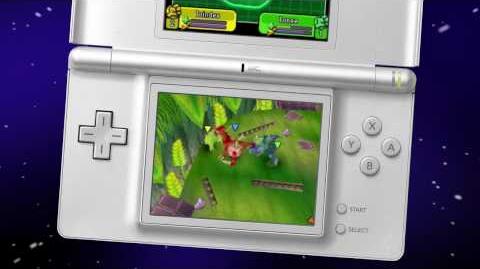 Retrieved from "https://spore.fandom.com/wiki/Spore_Hero_Arena?oldid=875177"
Community content is available under CC-BY-SA unless otherwise noted.