The First Intergalactic Map was the first canon intergalactic map that depicted all of the galaxies and major nebulae in the First Gigaquadrant- the so-far known universe. Many important galaxies are distributed throughout the Gigaquadrant, among them the galaxies of Xanthrus Spiral, Cyrannus, the Plazith Rim/Milky Way, and the Ottzello Galaxy. The map was created by a group of the Core Federation's best cartographers, with the aid of censuses answered by the residents of every included galaxy. 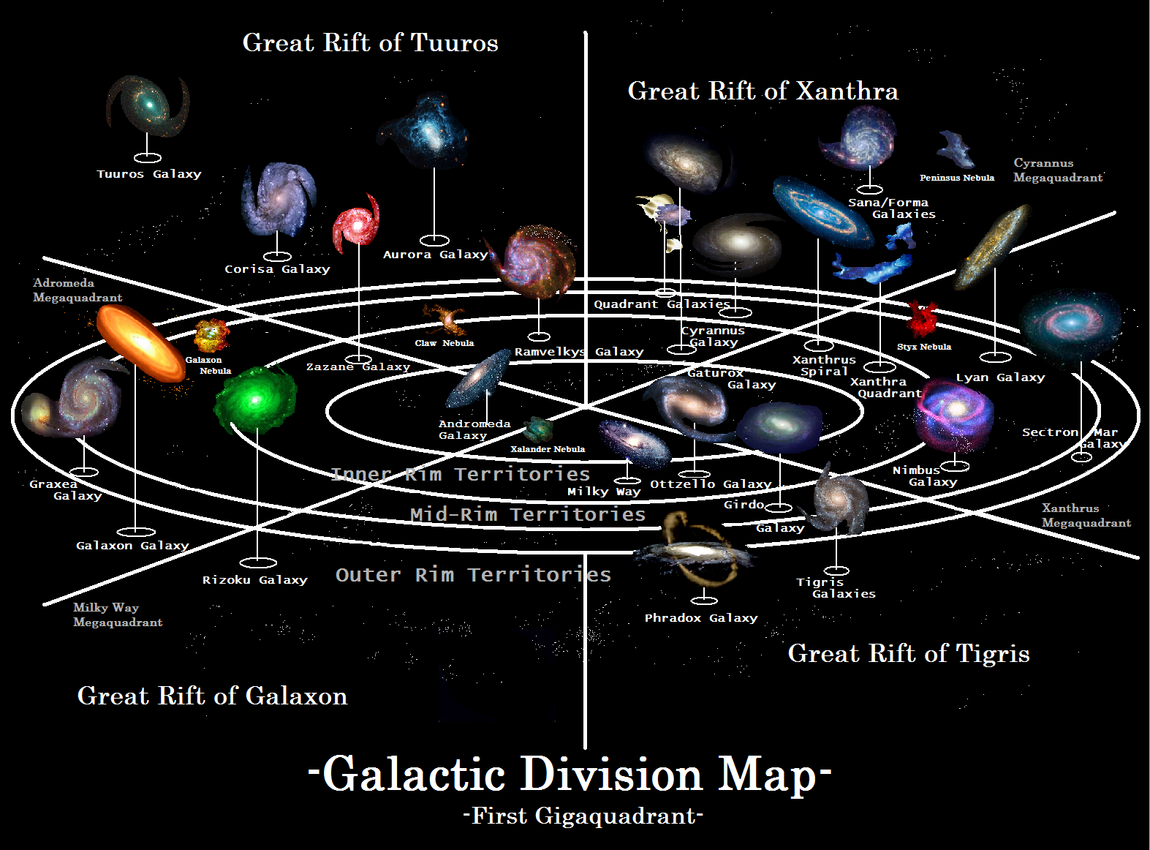 Xanthrus Spiral-The home galaxy of the Core Federation, Xanthrus is found in the Xanthra Quadrant and is under the complete control of the Ravenrii, citizens of the Federation. It is a military and civilian stronghold widely protected by the Last Gate of Xanthrus, an intergalactic gate. The galaxy is orbited by Xanthra Minor and Xanthra Major.

Cyrannus Galaxy-The home galaxy of the United Republic of Cyrannus, which have complete control over it, with the exception of a small CoreFed state, it is located near the Quadrant Galaxies and the URCs closest allies of Rambo Nation. 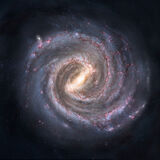 Milky Way Galaxy-Milky Way Galaxy is known as Milky Way Galaxy, the Plazith Rim or the Spore Galaxy. With over 400 billion stars it is one of the biggest and most influential in the local group, and contains many great empires, mainly the DCP, Jovar Empire and the BNSC and is the home of humanity.

Andromeda Galaxy-The Andromeda is the home of the Vartekians who completely control it as their home galaxy, The Vartekians also founded the Confederation of Andromeda. which still holds in great power today.

Nimbus Galaxy-A round, irregular galaxy home to the great Nimbus Kingdom, allies of the Core Federation. The galaxy is composed of many disks of stars that all rotate around the galaxy's center, where the Kingdom is located, at varying distances..

Tigris Galaxy-The Tigris Galaxy is a young galaxy, its age has not even reached the 2 billion years, so its size isn't also big at all, but its gravitational energy keeps attracting more and more planets, entire systems, making it big. Its majority is currently composed of blackholes.

Ramvelkys Galaxy-Ramvelkys Galaxy is home to the Sylit Republic and other empires, most in the Ramvelkys Alliance. The Galactic Core of this galaxy is a wormhole that leads to Cyrannus Galaxy.

Aurora Galaxy-highly underpopulated galaxy, the Aurora Galaxy is in actuality a collection of many smaller galaxies that had collided with one another. it has played host to fugitives, traitors, dictators, exiled criminals, and refugees. Now the new home galaxy of the Andceron Empire. 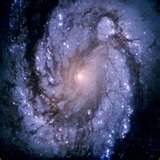 Corisa Galaxy-An almost completely uninhabited galaxy, Corisa was used by the Allies to amass before attacking Tuuros during the March of the Apocalypse. It is extremely old, though it has not started to divide and is moving away from the Gigaquadrant's rims.

Galaxon Galaxy- Seemingly uninhabited by any major space-faring race, the Galaxon Galaxy has become the locations of numerous colonies of both the Jovar Empire and the Core Federation. 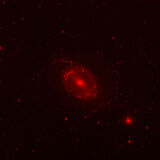 Tuuros Galaxy-A Barred Spiral Galaxy rich in the Nexidium Metal. Fully populated by Xhodocto, the galaxy is one entire stronghold controlled by the Deathmarch.

Phradox Galaxy- A galaxy that was previously devoid of life in its entirety, Phradox is in the Uncharted Regions and was only recently colonized massively by the Core Federation to establish a galactic reign. 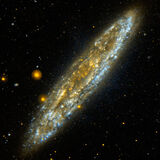 Lyan Galaxy-A medium-sized galaxy that is the home of the Goldem Imperium. The galaxy is extremely rich in minerals and natural resources, but almost devoid of life..

Zazane Galaxy-A red galaxy can be seen through the Inter-Universal Leak where the Zazane come from. The red galaxy is home to many more species who haven't yet come through the Leak.. 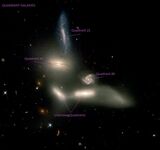 This is the Galaxy Sana, home of the sapo. They completely dominate this galaxy.

The Forma Galaxy, Home to the Warriorcell, the marmon, the Wikan, the Opague, the Faftart, the Lost ones, the Cecrop-nopt, the Omega, Descolda Esparioa species. It is next to the Sana Galaxy.
Kkk.png
Kread Galaxy-The Kread Galaxy is a small galaxy located slightly north of Milky Way Galaxy. It is home to the Toro Free Republic, the Sholian Federation and the Demonax Imperium.

Charqui Galaxy-The Charqui galaxy is a young and tiny satellite Galaxy which orbits Kread. It is 70 times smaller than Kread and is home to a single sentient race, the Charqui Trade Federation.

Auron Galaxy-The Auron galaxy is tiny galaxy, with about 300 Ly in diameter, disc type, and shiny yellow. It is orbiting Milky way, and it is inhabited only by the Terdiatlans. There is also one of largest touristic centers in the whole gigaquadrant for every species. Terdiatlans are patrolling there, and now none empire besides them is allowed to live there. Auron galaxy is also grand source of valuable platinium and golden asteroids.
Add a photo to this gallery

Galaxon Nebula- This nebula is being used by the Sylit Republic as an energy source.

Peninsus Nebula- This nebula is being used by the Core Federation as an energy source.

Claw Nebula- This nebula is being used by the Sylit Republic as an energy source.

Styx Nebula- This nebula is being used by the Sylit Republic as an energy source.

Xalander Nebula- This nebula is being used by the Jovar Empire as an energy source.
Add a photo to this gallery

Lagross Rift A living nebula that creates stars for the organism's breeding grounds (in the mass shadows). 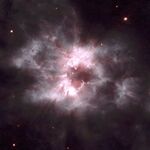 The Ionian Nebula is a supernova remnant located approximately 13,000 light years distant from the Twelve Colonies, it is a common tourist destination in the URC
Add a photo to this gallery
Retrieved from "https://spore.fandom.com/wiki/SporeWiki:Fiction_Universe/Intergalactic_Division_Map?oldid=620290"
Community content is available under CC-BY-SA unless otherwise noted.
FandomShop Newsletter GalaxyQuest