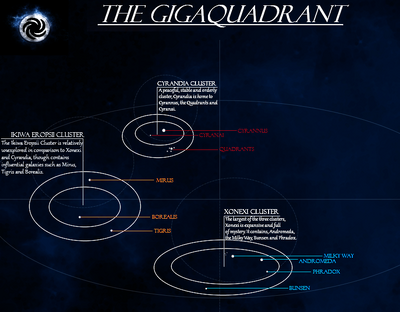 “The Gigaquadrant is many things. Life, death. Order, anarchy. A refuge for the lost. A canvas for the ambitious. A home for its people. A sacrificial lamb for its enemies. Things that have happened, things that will happen again.”

The First Gigaquadrant is a name used to describe the fundamental political division of the universe. As well as a geographic term the Gigaquadrant is also a political system, not extending physically throughout the whole supercluster but sprawling over inhabited stars and star clusters that have become connected to each other. After the devastating Annihilation, most of the universe was decimated, leaving the Gigaquadrant with only ten major galaxies: Andromeda, Borealis, Bunsen, Cyrannus, the Quadrants, the Plazith Rim, Mirus, Phradox, Eupherion, and Tigris. These galaxies are divided into three massive clusters, the Cyrandia Cluster the Xonexi Cluster and the Ikiwa Eropsii cluster, each of which are vast regions of space consisting of countless species and civilisations.

Although races such as the ancient "First Ones", the Kormacvar, the Oikoumene, the Andromedan Precursors and the Grox had reportedly spread across the newborn First Gigaquadrant billions of years before, and cultures like the Raev Imperium had settled its borders, the galaxies that would form its current expansion would only slowly move from their old positions, with old stars dying and new ones being born.

The modern Gigaquadrant began in recent centuries, when groups of civilizations, like the Seven Starr Alliance, began to explore neighbouring galaxies as a collective effort. But during the subsequent War of Ages, the demonic force known as the Xhodocto invaded much of the Gigaquadrant, destroying everything in their path and creating conflict all across the Gigaquadrant. It was in the Xonexi Cluster where the Tigris War, and soon a great deal of new alliances were made and technologies shared, until further wars engulfed the rest of the Gigaquadrant.

Despite this, the process of universal integration continued, with forums like the Cyrandia Alliance, The Civilisation and the Onuris Alliance being founded to deal with everything from political problems to economic ventures to organizing a war effort. It wasn't long before the Gigaquadrant took shape as it is now.

The aftermath of the devastating Annihilation left huge areas of the First Gigaquadrant destroyed and many of its former inhabitants, most notably the Delpha Coalition of Planets sacrificed themselves for the Gigaquadrant's continuation and with the help of various forces of nature or divinity, the major regions and galaxies were saved, such as the Milky Way and Cyrannus.

However, the Gigaquadrant was left in chaos, and large regions of the once prosperous Milky Way Galaxy were enveloped in war, while others in a dark age. A massive power vacuum was left by the DCP, one that many empires are trying to fill, albeit generally unsuccessfully. The Grox Empire, a major player in the former Gigaquadrant managed to survive and is currently colonizing the Milky Way's satellite galaxies, which is bringing it into competition with the Magellanic Sovereignty of Planets. Eventually, the DCP returned from oblivion, and the Grox Empire eventually dwindled into The Civilisation.

The other galaxies of the Xonexi Cluster, with the exception of Ottzello and the Girdo Galaxy which were destroyed, were not as heavily damaged politically as the Milky Way, with Andromeda seeing a large influx of new colonists from empires such as the New Shka'Tun Imperium while the native Confederation of Andromeda was absorbed by the Confederacy of Allied Systems from the Cyrannia Cluster. Andromeda soon became a major player in the Gigaquadrant, during the Andromeda War, which led to the formation of the Andromedan Galactic Commonwealth. Following this, the Second Borealis Galactic War happened in the Borealis Galaxy, resulting in the rebirth of the Polar Crystal Alliance.

Unlike the Xonexi Cluster, the nearby Cyrandia Cluster was left relatively unaffected. The Cyrannus Galaxy continued to be in the grip of the Great Cyrannus War and it's citizens went about their daily life's, due to the intervention of the Atlantica and the Oikoumene while in the Quadrants, a similar situation saved them. However, the Quadrantia Wormholes that lead to other galaxies were closed, with the exception of the ones leading to the Cyrannus Galaxy and Mirus. With the sacrifice of the DCP, the Cyrandia Alliance, made up of the United Republic of Cyrannus and Rambo Nation was often considered to have collectively become the Gigaquadrant's foremost political power.

However, in the aftermath of the Great Cyrannus War, the United Republic of Cyrannus, the Confederacy of Allied Systems and the New Basileus Empire as well as a great deal of other factions united to form a new Imperial hyperpower, the Galactic Empire of Cyrannus under the control of the Galactic Emperor Tyrómairon. Within a few months, this new Empire conquered Rambo Nation, and placed the Kraw Galaxy under a protectorate, becoming one of the largest nations to have ever existed.

In the Mirus Galaxy, the Cyrannica-Tralo'aear Concordat designed to put the United Lanat Empire within the influence the Galactic Empire of Cyrannus greatly weakened the grip of the Lanat upon the galaxy, shifting power away from the core region to the outer reaches and the sattelite galaxy of Tyris Major. This resulted in a series of minor wars which saw a gradual consolidation of power in these regions around the Mendel Pact and their allies, such as the Volver Empire. The proving point of this new bloc of stability was to be the First Void War, the first time in an age when a new type of essence would be discovered. This alliance would have eventually crushed its last opposition in the form of the Zarbania Powers and the Imperium of War, if not for the rise of the Drakodominatus Tyranny. This new power first forced the alliance of the Powers and Imperium to itself, then pushed the Mendel and their allies on the defensive. It would continue to expand exponentially, though would eventually overplay its hand when the rest of the Gigaquadrant rallied against it in the Great Tyranny War.

Some consider the Second Era to have ended with this war that culminated in late 2795. Historians, writers and poets note that while in the first era, the threat the Gigaquadrant banded together to fight against was supernatural, that in this second era, the existential threat they fought against was mortal. Rather than credit the now-extinct Dominatus with threatening the Gigaquadrant due to some kind of exceptional quality they possessed, historians instead argue that this threat was made inevitable by the intercourse of simple statistics and the non-linear changes made possible by the myriad technological and methodological revolutions occurring in the Gigaquadrant, most importantly, the Hyperspace revolution. Famously, the work Not So Special by the noted French historian Pierre-Marie Vernier argued that a threat like the Dominatus would have come along sooner or later - a race enabled by providence to act upon its hubris would have the scale of eventual failure magnified by the magnitude of technological advances made possible at the end of this era. The end of this war would see myriad secret and open agreements, contingencies, and plans made by the Gigaquadrant's leading powers, setting the stage for the Third Era.

The third age of the Gigaquadrant is considered to have begun in the Terran year 2800 or the Cyrannian year 04 NE and has been categorised as one of political instability and conflict in some regions of the Gigaquadrant and peace and exploration in others. In the Xonexi Cluster, a massive outbreak of violence occurred when several empires banded together to form the Xonexi Allies in opposition to the growing strength and imperialist tendencies of the Delpha Coalition of Planets. This war would become known as the Great Xonexian Schism and would prove to be far-reaching and devastating, rearranging the map of large portions of the Cluster.

While the Great Xonexian Shism raged in the Xonexi Cluster, the Imperium of War unsuccessfully tried to fill in the power vacuum left by the Dominatus. This would lead to yet another shift of power in galaxy with the establishment of the Covenant of Mirus, in which the victorious Xonexi Allies vowed to oversee the stability of the Mirus Galaxy. Though unpopular with the natives, the establishment of the Covenant of Mirus, coupled with the collapse of the Imperium of War, did lead to an unprecedented period of peace in the historically turbulent outer reaches of Mirus. Meanwhile, the Galactic Empire of Cyrannus would go on to redefine its relationship with the United Lanat Empire in the Fall of Lanat Prime, which would see the Lanat become a protectorate of the Galactic Empire and see the core region be firmly placed under the control of the Cyrannians.

In the Cyrandia Cluster, areas of Cyrannus and the Quadrants became engulfed in the New Cyrandia Wars between the Empire and the Cyrannian Imperial State, a conflict which would attract the attention of both native empires and extragalactics. Despite this, the newly formed New Cyrannian Republic and Rambo Nation became instrumental in creating the Mou'Cyran Accords in order to create a united front of empires against the Gigaquadrant Conflicts. This movement would see substantial growth in all three clusters, including Xonexi, and continues to work toward peace and order in the cosmos.

However, forces such as the Bisistar Domain, the Dominion of the Xhodocto and even mysterious beings hang over this new age of the Gigaquadrant. These times also marked the return of the Krassio, the psionic essentials that had led important alliances during the War of Ages and had been considered extinct. They emerged from the quadrants and began to actively participate in galactic conflicts such as the liberation of the quadrants from Cyrannian control and the re-establishment of the New Cyrannian Republic. Their resurgence sparked a revival in the use of essence across the gigaquadrant and it saw an awakening or spread of several new types of essence in the universe. 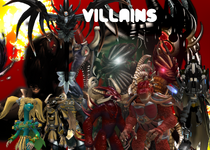