Umbramancy, most known as Dark Magic is one of the divine schools of the Source, based around the manipulation of "demonic" darkness. Often associated with pure, raw evil, it is one of the most controversial schools of among members of the magic community due to its negative effects upon the world.

Tales say that the Old Colossus of Darkness, Siivhahzin, was born out of the repressed sins of immortalkind, leading to the birth of a terrible entity made entirely of wrath, envy and hatred. Use of dark magic would quickly be recognized as dangerous once the races of Koldenwelt realized most Simulacrum demons - such as those under the control of Zran Kar, Kalisearan and the Cult of the Eclipse -, as well as the curse of therianthropy were associated with umbramancy at a fundamental level, causing many to shun the practice altogether. None of the great immortal empires of the world were known to practice dark magic, likely for this reason.

The oldest mortals known to have widely practiced umbramancy were the Aithrena Elves, whose very souls were linked to the essence of darkness, though they never truly used it with malevolent intent. During the transition between the Adamantine and Old Ages, mortal umbramancers became more prominent - due to the actions of the demonic Zran Kar - with the rise of Clotholaire Moirai, who is widely considered the mother of the hex arts, and the creation of vampirism through the first Pureblood Vampires. Use of dark magic for evil, such as with the brutality shown by the Skaurovirn, the threat of necromancy demonstrated by Ahdramilús and the attempted conquest of the Eastern Continent by the Colossus Draethos, further cemented umbramancy as a threat to civilization.

In the current day, umbramancy is shunned in nearly all societies. Few, such as the Sovereignty of Dryada (which was partially founded by umbramancers) are more accepting, but even novice practitioners must be sanctioned by the state to ensure they do not misuse their power for evil.

Umbramancy is drawn from the dark side of the Source, being heavily associated with negative emotions. It is a manifestation of one of the two sides of Isiris which, contrasted by light magic, creates perfect balance. Umbramancy also permeates the Simulacrum realms of the Underworld, Sanguine Hill and the southern hemisphere of the Outworld, where the demons born from them are granted souls made out of darkness.

Due to its evil connotations, most practitioners of dark magic are exiles in one way or another. Few societies are willing to work with umbramancers, for even the most skilled of them are under constant temptation of using their power for their own gain only, willing to sacrifice anything and anyone for the sake of increasing their might. Umbramancy and luxomancy are fundamentally opposite and cannot be safely combined through non-divine means.

Most of umbramancy's powers are centered around causing harm. Use of darkness can deal damage to body and spirit, snuff out light and suck the energies out of other living beings. Perhaps the most famed ability of umbramancy, however, is creating undead - with powerful magic, a rotten and decomposing corpse can be given imperfect life, their souls being left stuck in a limbo between the mortal spirit world and the Underworld in the process. A practitioner of dark magic who dedicates themselves to the art of creating undead is known as a necromancer, though some may go further; a necromancer may become undead for the purpose of achieving eternal un-life, using dark magic to remove their souls from their bodies and place them inside of an object known as a phylactery, which may take the form of a container, jewel or similar. Such beings are known as liches.

Certain other umbramancers use special spells known as "hexes" to create a wide variety of effects, including casting curses upon others or mimic spells more often associated with other magic schools - these are known as warlocks (if male) and witches (if female), who are often shunned by most for their trickery and arrogance. Because of it, exiled witches tend to congregate in covens, where they may practice their arts without having to worry about others.

Umbramancers who pledge themselves to Vargash are given gifts of dark power, often in the form of great bodily mutations, which grant them control over "abyssal magic" - umbramancy empowered by the monstrous demonic power of Ramainaualmari. Those who follow the dark path of the Cult of the Eclipse are granted the ability to open small portals linking Koldenwelt to Crystallis, allowing Kruos demons to pour through and cause havoc in the mortal world. Followers of other Simulacra may also possess the ability of creating portals, but those of the Cult of the Eclipse are the most frequent to exist. 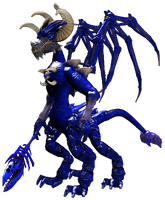