Tales say that the Old Colossus of Water, Tritonomarth, used his divine power over hydromancy to aid in the creation of the world alongside the other elemental gods, with him being responsible for the creation of the oceans. Water elementals and Great Water Dragons inhabited the surface of the world since times immemorial, as did one of the great immortal beastman empires, the Ondarei Mharinis, who would create the greatest civilization to ever exist in Koldenwelt's oceans.

Hydromancy draws its power from water. As such, it thrives in wet conditions (such as during the rain or when exposed to high humidity) and is highly associated with the sea. It possesses a strong connection to its child school, cryomancy, but a practitioner of pure water magic is unable to manipulate ice and vice-versa. Predictably, water magic is not easily mixed with pyromancy, which is considered its main counterpart, though such fusions are not entirely impossible.

Hydromancy is one of the most commonly used magic schools in Koldenwelt due to the importance of life in life and society. Experienced practitioners of water magic tend to be widely respected for their wisdom and knowledge of the great blue expanses of the sea, while also feared for their formidable power over the waves.

The simplest power of hydromancy involves granting the user the ability to breathe underwater without consequence, as well as the power to swim gracefully through any body of water. Offensively, most practitioners of the school manipulate nearby bodies or water to their command, but more experienced mages are known to have the power to condense water particles to create jets of it out of thin air. Due to being liquid and often being launched at great speeds, a jet of hydromancy can deal great damage, especially to unprotected targets.

Hydromancy may also be used by water-breathing creatures to allow them to walk on dry land for extended periods of time, though most hydromancers - regardless of race - develop the need to remain near water, making locations such as the Sea of Sand particularly difficult to travel through. 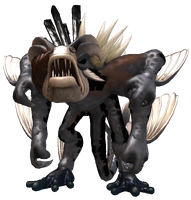