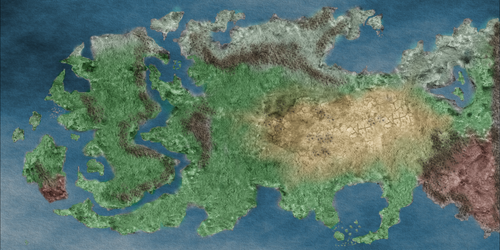 The SporeWiki Fantasy Universe is a large high fantasy setting revolving around the civilisations of "Koldenwelt", a planet located in a separate setting from the Fiction Universe where civilizations have flourished for over thirty thousand years in two main continents as well as a large number of smaller islands. Compared to the Fiction Universe, which is inspired by the Space Stage, the Fantasy Universe is roughly inspired by the Tribal and Civilization Stages.

The Fantasy Universe is a collaborative universe made by many users on the wiki. Though the theme of the Fantasy Universe is primarily character-based storytelling, wars and battles between empires are also welcome. There is generally little pressure or limits for the Universe, and it has few rules so there is lots of potential for imagination. However, there are some standards to follow.

The Fantasy Universe was first conceived by Ghelæ, TheImperios and Dinoman82 at January 30, 2011, where basic concepts such as the planet, its main inhabitants (the humanoid Deiwos, the draconic Kelodhros and the animal-like Theriocephali), its magic properties, the original continent, the War for the Eye and the Colossi were introduced. Other users such as Xho, TheHachi, OluapPlayer and various others would proceed to help populate the setting with protagonistic, antagonistic and neutral species and factions. However, at this point, interest in the Fantasy Universe lowered until it became inactive.

Interest in the setting would re-sparkle in 2014 where the users returned to the Universe and gave it a big overhaul, detailing the setting and its concepts with the creation of a second continent, various new magic schools, detailed pages for each major region and its inhabitants, the Simulacra and their alternate dimensions, and a more detailed explanation of Koldenwelt's history.

2015 marked the beginning of the first major scale fictions of the setting, including the Eschaton, which has served as the setting's equivalent of the War of Ages. 2016 followed with similar character-based fictions stories through its entire duration.

The current date accepted by the community is:

Unlike the Fiction Universe, the Fantasy Universe does not use a real-life calendar. Time passes according to the community's consensus.

Add this userbox to your userpage to become a member of the Fantasy Universe.

To use this template on a page (user page, subpage or fiction page), simply add {{User fantasy universe}} to it.

All users who have officially joined the Fantasy Universe are welcome to add their very best pictures!

Retrieved from "https://spore.fandom.com/wiki/SporeWiki:Fantasy_Universe/Old?oldid=828783"
Community content is available under CC-BY-SA unless otherwise noted.