Orbiting nearby star to Homeworld

By default no empire
The player can't colonize

The Ruined Planet is a planet that orbits a star nearby to the player's home Star. The planet has no spice geysers and so cannot be colonized manually.

Once the player has entered the planet, a radar detects the ruins. The player must scan it to complete the mission and return with results. Once it is scanned, the communication panel opens. Although the empire name may vary, it always believes that the player is the Grox. Security drones will attack the player, and the player can either fight back or escape. 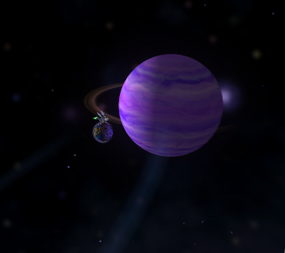 A rare occasion where the Ruined Planet is a Gas Giant's moon.

Security Drones attacks the player.
Add a photo to this gallery
Retrieved from "https://spore.fandom.com/wiki/Ruined_Planet?oldid=816478"
Community content is available under CC-BY-SA unless otherwise noted.